SPOILER WARNING: Although I don’t directly discuss story events that occurred in either the base game or A Requiem for Innocence, the background footage used in the video (or images in this article) may be considered a spoiler for some (especially if you have context), so read/watch at your own risk. I stuck with footage from very early on in the game to limit such potential spoilers.

Earlier this year, I reviewed The House in Fata Morgana, a visual novel quite unlike anything I’ve ever played before. And now it’s about time I take a look at its companion game: A Requiem for Innocence, which came out roughly three years after the original did in Japan. It’s a game that attempts to fill in some of the blanks from the main game, so I was excited to get into it.

Excellent art style and music. As with the base game, A Requiem for Innocence sets itself apart from the crowd with its unique art style and music. You got your characters that, while still “anime” in their design, have a more realistic style applied to them, backgrounds that go from super-stylized filters on real images to more abstract alternatives, and CGs that blend these two together. The overall dark gothic art style really sets the tone for the type of story told here, making for a more immersive VN experience.

And of course, there’s also the soundtrack. While not as good as the soundtrack from the main game, it is far from bad. In fact, it’s much better than what we usually get in the medium. The bulk of it is mostly subdued piano tracks, but there’s also some really great vocal tracks thrown in there, a couple of which are easily some of the best I’ve ever had the pleasure of listening to in any visual novel. In fact, it’s one of the few games where I get instant chills from just hearing the beginning few notes of a song, it’s just that good.

Interesting story that fills in the blanks. The main draw with A Requiem for Innocence is that it attempts to fill some of the blanks left by the main game. Fortunately, this is something it does really well, telling a story that not only is enjoyable to read on its own, but provides some very interesting context for the events from the main game. It really goes hard at this too, developing entire characters and such that were only mentioned in maybe two or three lines from the main game. 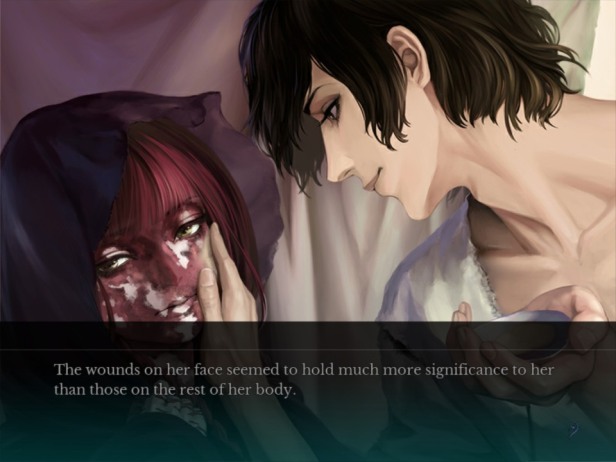 And it’s not like the writer was just squeezing the base game for details for the heck of it. All of these details come together to form an in-depth and interesting storyline, one that actually made me reevaluate how I feel about certain events and character from the base game, a game that I thought I had a good understanding of. It’s a very powerful story in this sense and makes for a great companion to the base game.

Side stories that actually add something. On top of the main story, A Requiem for Innocence also provides a number of smaller side stories, most of which can be played independently of that main story. However, these aren’t just throwaway filler stories, they too serve to fill in blanks left by the main game. Again, I won’t spoil anything here, but I will say that theses stories take place throughout the course of the main game, closing some loose ends in places and providing further detail in others.

They also vary in quality, with the first one being decent, the second being a bit iffy, and the third completely blowing those two out of the water. In fact, the third is up there as one of my favorite parts to the overall story, it’s definitely a bit of extra content worth your time. However there are a couple other extras unlocked after clearing everything else in the game, the last of which is yet another excellent little addition to the overall story. It was quite fun to play through these and unravel more of the Fata Morgana universe.

Writing simply isn’t as good as the main game. As much as I may have just praised the game’s main story and side stories, the overall writing just simply isn’t as good as the base game. It has the same “slow to get going” problem as the first, but aside from that, it felt like it spent more time “telling” rather than “showing”. The writing very clearly states what is going on most of the time and doesn’t really leave much up to the reader, whereas in the first, it felt like there was a decent balance there. It’s still a great story, but it just isn’t up to par with the quality of the writing in the base game. Perhaps the bar was just set too high there.

Lossy soundtrack compression. Just like the base game, A Requiem for Innocence also features a compressed lossy soundtrack. I gave a more expansive explanation in that review, but basically what it means is that the background music included in the game is compressed to the quality you’d expect from a YouTube video, rather than being fully lossless like other games. This normally would not be too much a problem, but unfortunately you can really notice it in some tracks here.

Given the three-year gap between the base game and this one, I had at least expected an upgrade there, but unfortunately that simply didn’t happen. At least this time around the official OST release has some lossless tracks, but from what I’ve seen from the game files, the actual game does not, which is really just unfortunate given how good the music is here.

Despite not being quite up to par with its predecessor, A Requiem for Innocence is still a solid visual novel all things considered. The story is interesting, the visuals are great, and the soundtrack is some of the best you’ll get in the medium. As a companion to the base game, it does an excellent job filling in a bunch of the blanks, both in the main story and in some surprisingly good side stories. Despite this, I would absolutely recommend playing the original game before this one. In fact, I hereby forbid you from even considering playing this one until you’ve played the original, the experience just won’t be the same.

You can buy The House in Fata Morgana: A Requiem for Innocence on Steam here.