As someone that’s really into Japanese and WWII history, Strategic Mind: The Pacific looked to be right up my alley. It’s got some in-depth naval and air combat, some decent strategy mechanics, and it even allows you to play both sides of the story in a campaign mode. However, after playing it for a bit, I’ve gotta say that I’m pretty disappointed.

I’ll start with what I did like about the game. At its core, the strategy mechanics are not all that bad. You can control individual units (both naval and air), the guns and equipment on those units, and even target specific parts of enemy units. Then there’s the whole upgrade and recruitment system, the hero system, and the repair system on top of that. Granted, none of these are standout features, but they at least do their job. The combat in particular was pretty well-done, making some of the other mechanics feel a bit shallow.

Most of the problems really start appearing when you look at the game from a technical standpoint. Right off the bat, when I was going through the game’s tutorial, I had already managed to break it. I don’t know how exactly I did it, but I somehow got it to lock up on me and prevent me from making any moves, even the moves the tutorial was guiding me to make. So given that, I force closed and decided to just hop into the campaign, as the game currently does not offer a skirmish mode, which I would think that any decent strategy game would have, but I was still willing to give this one a shot.

Then I was greeted by some absolutely abysmal voice acting and outright cringy cutscenes. I can understand that the developers are probably a smaller team and can’t afford decent cutscenes, but the cutscenes aren’t even necessary in this type of game. And on the topic of graphics, this game doesn’t really look all that good either. It’s hard to explain, but even on max settings it looks like the textures were taken from a lower resolution and scaled up, giving it this blurry appearance. The animations aren’t all that good either, with units frequently moving in ways that just look awkward.

Then there’s the controls. I wasn’t really satisfied with the default layout, so I looked at the settings menu and realized that you can’t actually change any of the controls. I even looked at the game files to see if something could be changed there, but unfortunately found nothing. Hopefully this is something they can patch in later, but as it stands, you’re going to have to stick with the default controls even if you don’t like them.

However, even with those default controls, selecting units is still a pain. A lot of the time, you have to actually click on the unit model itself instead of the tile it is resting on, which can be a bit annoying for units that are stacked on top of each other. Misclicking is also a bit of a problem, because left click not only selects units but is also used to move them, so if you fail to click on the unit you want, you could accidentally move another unit to it, which I did quite a bit.

With all of that said, I cannot really recommend Strategic Mind: The Pacific. Although the strategy mechanics are fine, even if a bit shallow, they are marred by a number of other issues, from wonky controls, to subpar graphics. The game could definitely have used a bit more polish while it was still in Early Access. 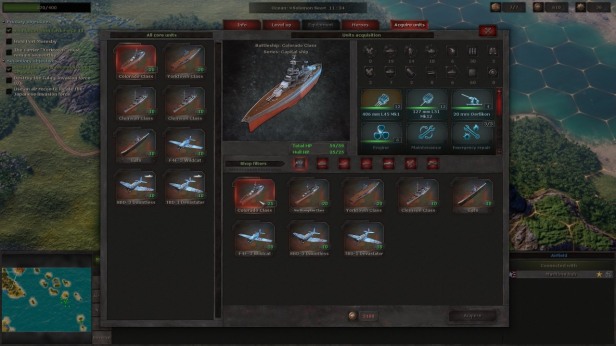 You can buy Strategic Mind: The Pacific on Steam here.

I was provided a review copy of this game. Read more about how I do my game reviews/impressions here.