September was a big month for games, with giants like Borderlands 3, Greedfall, and Dragon Quest XI S all having been released. However, with this video I am going to be highlighting six hidden gems that may have gone under your radar. Before we begin, I would like to thank all of the publishers who provided these games to me to make this video possible. And, as usual, this list is in no particular order, so without further ado, let’s get right into it.

So Kind Words is not really a game in the traditional sense. It’s more like an anonymous message board centered around sending kind words to strangers, hence the title. The gameplay consists of sending requests (which are basically confessions or worries that you yourself may have), receiving such requests from others, and replying to these requests.

Of course, all of this is anonymous, so you’ll oftentimes find yourself getting some pretty serious letters, whether that be someone writing about their troubles at work, someone venting about a relationship, or just someone worried about the future. It’s some pretty tough stuff at times, but that’s where you come in. You can reply to these letters and offer up some advice, give a similar experience in your own life, or just let that person know that they are not alone in their worries. You can even attach a little sticker to the end of your replies.

And if you don’t want to reply to these letters, you can just as easily send some kind words to all players through a paper airplane, which will then show up in other players’ rooms. I personally spent a lot of time reading through letters, replying to them, and offering up a few letters of my own. For example, I asked for movie recommendations in one letter and got a bunch of people recommending me movies from all over.

It’s a very unique game experience and one I don’t think I’ve seen done in the medium before. I only hope that it isn’t overtaken by trolls at some point, but in the time I played it, I didn’t run any such messages, so hopefully that continues into the future!

Remember that game Keep Talking and Nobody Explodes? Well, if you took that and swapped out the bomb for a demon, you’d end up with Exorcise The Demons. It’s a co-op puzzle game in which only one player can see the screen, but this player lacks the instructions to complete the in-game puzzles. Only players not actually looking at the puzzles have access to the instructions, which come in the form of a simple PDF file.

It becomes a game of communication, with the screen player having to constantly update the others on what he/she is seeing and the others relaying back instructions on what to do, all while a doomsday clock is ticking down. It can lead to some pretty funny moments, like when I had to describe the shape of demonic runes that just looked like a bunch of scribbles or when my friends argued about whether a certain position on a puzzle was 4 o’clock or 5 o’clock.

Now, the game does not come without some issues, most notably with its shoehorned storyline, wonky translation, and lack of a mouse sensitivity option, but for those that enjoyed Keep Talking and Nobody Explodes, Exorcise The Demons provides an interesting change of setting. 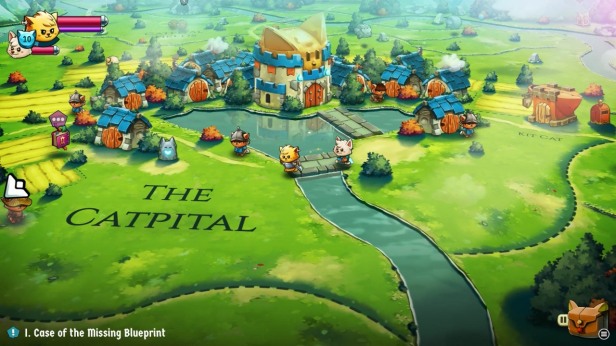 Building on the success that was the original Cat Quest, developers The Gentlebros return with Cat Quest II, a sequel that expands on just about everything that made the original popular. You play as either a cat or a dog, both of which have fallen from their thrones in the cat-populated Felingard and the dog-ruled Lupus Empire respectively. These two must work together in order to reclaim their thrones, going on an adventure full of quests, magic, and danger.

The game is basically a 2D open-world action-RPG, one where you can pick up quests as you go and pretty much do what you want for the most part. There are sidequests to complete, dungeons to explore for loot, and enemies to fight on the map for when you don’t want to work through the game’s main quest. Many of these quests lead to even better loot, cool boss fights, and plenty of new areas to keep the experience going.

Combat is divided into two types: physical and magical. Both cat and dog are given a spell slot, which can be activated at any time in battle. Both are also given a base attack to work with, but this attack can be upgraded with weapons found scattered throughout the world. Swords allow you to do more psychical damage while staffs allow you to do magical damage from a range. Some enemies are more prone to one than another, so it becomes important to divide your damage equally.

That’s where the switching mechanic comes into play. In singleplayer mode, you’re able to swap to and from the cat and dog at any time, with whoever you’re not currently playing providing backup through basic attacks and spells. However, a second player can also hop in and take up that role, making Cat Quest II a perfect couch co-op game. I personally played the game in singleplayer, but look forward to having a friend over to tackle it in co-op.

After a successful Kickstarter raising over $100,000, Jenny Leclue finally arrives on PC, a whole three years after its initial intended release date. In it you take up the role of Jenny LeClue, the world’s greatest detective, who resides in the quiet town of Arthurton. The early cases that Jenny is tasked with reflect the town’s quiet nature, such as having to find misplaced papers in a classroom or figuring out what the college dean had for breakfast. However, this quickly changes when Jenny’s mom is accused of murder. You’re thrown into a journey to seek out the truth and, along the way, slowly unravel the mystery that is Arthurton.

Although the game does look like a point-and-click, it actually plays like a 2D adventure game, with multiple puzzles scattered throughout. You’ll spend a lot of time exploring the game world, searching for clues using Jenny’s handy magnifying glass, and making decisions that change certain story events. Of course, all of this compliments the game’s handmade world, full of interesting characters, diverse environments, and mysteries to be solved.

One thing to note is that this is only episode one in what is supposed to be a two-game story arc. The Kickstarter never reached its stretch goal for episode two, so as it stands, Jenny LeClue leaves off on a cliffhanger. However, the devs do plan on continuing the story and have even stated that player choices in this episode will influence how they develop the second.

Flotsam, for those that don’t know, is a term that describes the wreckage of a ship and/or its cargo found floating on or washed up by the sea. It is the perfect term to serve as the title for this game, which just came out in Early Access about a week ago. In Flotsam you are tasked with building up a floating city made up of the very garbage you find floating out at sea. It’s a very unique setting for a city-builder and provides for some pretty fun gameplay, with all of the staples of the genre included.

You’ll be scavenging for material, building new structures, researching, fishing for food, purifying salt water, and, unlike most other city-builders, actually making progress along a map FTL-style. You basically slap a sail on your floating junkyard and move to new areas with everything intact, picking up materials and survivors along the way. It’s a very cool progression system that goes well with the game’s overall theme. In fact, it kinda felt like what would happen if you took Waterworld and made a city builder out of it.

Of course, the game’s cel-shaded graphics are also worth mentioning. Structures, islands, and even the water itself all look great and it’s very cool to see the city and all of its structures bob up-and-down with the water. You’ll even see the occasional whale from time to time. Add the relaxing soundtrack on top of that and you get a game that’s oddly calming to play in spite of its survival nature. In its current state, it does have some performance issues (especially when loading into new areas) and a general lack of content overall, but for a game just entering Early Access, it’s already pretty good.

At first glance, Noita appears to be just another action rogue-lite with pixel graphics, but there’s more to it than just that. That is because those pixel graphics are actually simulated, and not just specific objects, but every individual pixel. It’s an action rogue-lite where you can blast, melt, freeze, burn, and even evaporate your way through its procedurally generated levels.

Of course, there’s more to it than just exploration. Along the way, you’ll be killing enemies and picking up all sorts of loot. A lot of this loot comes in the form of magic wands, which are your primary means of damage. These wands can not only dispatch of enemies from afar using arrows or other projectiles, but many have effects that directly alter the game world, including black holes that suck up everything in their path, bombs that can blow up huge portions of the level, and even a combination of these and more effects.

The game just launched as an Early Access title and is estimated to remain as one for about a year. However, even in its current state, there is a lot to take in, and given the random nature of its gameplay, this is definitely one I can see myself returning to.

And that’s all the games I have for this video. This month was pretty busy for game releases, hence why I included six instead of just five. Maybe October will be less busy, we shall see in about a month. Anyways, if you’re not already subscribed, be sure to do so, it really helps out. And if you got any games that maybe I missed over the past month, do leave a comment down below, I’d like to see what everyone has been playing. Thanks for watching and see you guys in the next one.