From the same guy that brought us Super Hexagon and that game with too many V’s in the title comes a new indie by the name Dicey Dungeons. This time you play as a die, working through a variety of different dungeons using dice to fight enemies along the way. It has some pretty neat gameplay mechanics and a good soundtrack on top of that, but does still have a few problems.

Fun deckbuilding mechanic. Given that Dicey Dungeons is a game based entirely on RNG, it has to do something to at least make the game feel like it’s winnable. This is where the deckbuilding system comes into play. Throughout your journey you will come across a number of cards, whether that be from leveling up, found in treasure chests, or purchased from shops. These cards range in their complexity, with some simply damaging an enemy for a certain amount and some applying a variety of different status effects.

From there, you’ll run into cards that require multiple dice to activate, cards that modify the values of existing rolls, and cards that have specific effects for whatever character you may be playing (more on that later). It’s surprisingly in-depth for a game built entirely on RNG and actually gives the game a sense of skill, especially given just how complex the cards can become. It’s kinda like the Yu-Gi-Oh! or Pokémon TCG in a sense, where the game is reliant on RNG, but has so much built on top of that that it really doesn’t feel like it. It’s a pretty cool system and makes for some rather fun gameplay.

Excellent character variety. To expand on the variety offered by the expansive deckbuilding system, Dicey Dungeons also offers a bunch of characters to choose from. These characters all have their own traits and such, but they’re not just simple passives. Some characters change the entire way that the game is played. For example, whereas the first character, the warrior, rolls dice like normal to use cards, the robot has to calculate these dice. 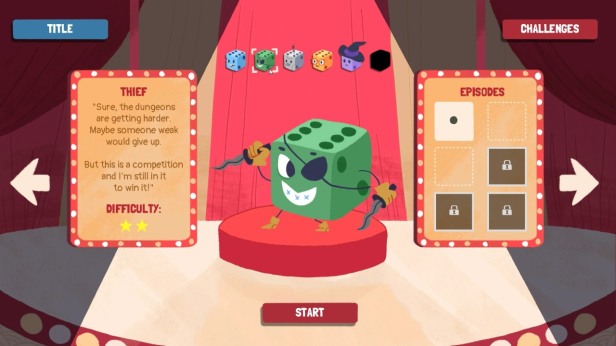 To be specific, you’re given a meter that has an upper limit and can roll dice until you reach that limit. If you roll dice and go over that limit, you’ll be unable to use any more cards the current turn. If you roll dice and their values add up to the limit exactly, you land a jackpot and can choose from a few additional effects. It completely changes the way that the game is played, and this is just one example. There are several other characters that have similar gameplay changers, some more difficult than others, but all of which are fun to play with.

Great soundtrack. Chipzel, the same artist that brought us the excellent Super Hexagon soundtrack, is back again with the soundtrack here for Dicey Dungeons. If you’ve never listened to the Super Hexagon soundtrack before, it’s pretty much a bunch of super upbeat and energetic chiptune tracks. Dicey Dungeons continues this trend, with a bunch of upbeat music to match the fast-paced gameplay. However, it also offers some more atmospheric stuff to balance it out, providing for a very good overall soundtrack. What makes it even better is that all of this music can easily be found in the game files and copied elsewhere for easier listening when not playing.

Can become repetitive when played for longer periods of time. The core mechanic to Dicey Dungeons is also one of the reasons why it becomes hard to play for more than an hour or so at a time. Because the game is built entirely on RNG, there was only so much that I could handle before I started losing interest. I could be doing really well, only to get shut down on the last floor by a series of bad rolls. To give an example, I had a great run as the robot going. That was until I got to the boss, who managed a series of rolls that had a less than 1% chance of happening, ending my run right there. 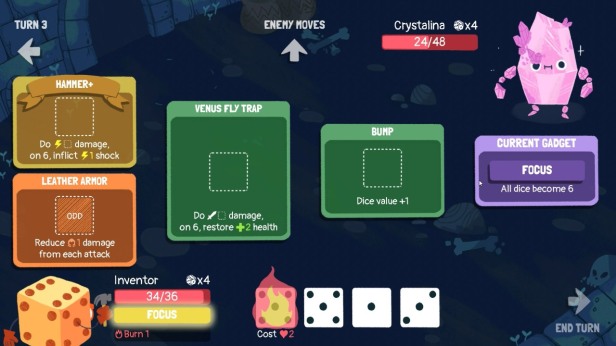 Given that this is a roguelike, having a run shut down by a boss like this is pretty normal, but because it’s 100% due to RNG here, it is a bit disappointing. And although the combat and deckbuilding mechanics are pretty complex, it doesn’t take long before you start seeing the same enemies, similar level layouts, and even the same cards. As a result, this ended up being a game that I could only play for maybe thirty minutes to an hour or so at most before going elsewhere. This may not be a problem for some, but I felt it was worth noting.

Lack of settings and controls. Going into Dicey Dungeons, I had thought that it was a game being ported over from mobile. I was actually surprised to see that no mobile version of the game exists, as given the UI and overall aesthetic, it definitely looks like it was designed for mobile before PC. Unfortunately, this also shows in the game’s settings and controls, with the game completely omitting some options that I would consider essential.

For example, the only graphical setting is the toggle between windowed and fullscreen. There’s no borderless window option, no resolution options, and no configurable controls. In fact, the entire game is played with the mouse, so if you’re expecting to use the keyboard in any way, well, be prepared for disappointment. The same applies to those wanting to use a controller, as the game offers no native controller support. Those wanting to use one will have to map the analog stick to the mouse manually, which really doesn’t feel that good to use anyways. At the bare minimum, some keyboard shortcuts would have been nice, but as it stands, you’re stuck with the mouse-only controls. 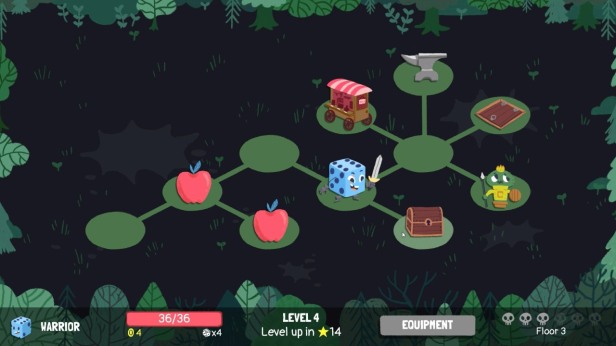 Dicey Dungeons is exactly the kind of game I could see myself playing for thirty minutes or so at a time. For being built entirely on RNG, it has some pretty interesting gameplay mechanics and the character variety on top of that just adds to the fun. However, it does suffer from a sense of repetition when played for longer periods of time, along with having some issues related to settings and controls.

You can buy Dicey Dungeons on Steam here.