Attack on Titan 2 was one of my favorite games released last year, taking the #5 spot on my yearly top 10. As such, I was excited to jump back into it and play through Final Battle, a massive DLC that’s more akin to the expansion packs of old rather than your everyday DLC.

Expands on the pros from the base game. Right off the bat, one thing this DLC does really well is take most of the pros from the first game and further expand and refine them. The movement is still just as fluid and is expanded upon with the new Anti-personnel ODM Gear, the combat is still very fun and now allows the use of thunder spears, and the optimization is pretty good considering how much can be on-screen at any given moment. For fans of the base game, it’s pretty much more of the same with a few new cool additions, which is definitely fine in my book.

Decent amount of content. When I called Final Battle more akin to an expansion pack, I wasn’t just saying things. Just clearing all of the missions in the new character episode mode alone took me over seven hours to complete. That’s just over half of the time it took me to complete the base game. This new content isn’t just filler either, it is a pretty expansive take on season 3 of the anime, with a bunch of story events and missions just like the base game. For a single DLC, this is a lot of new content, and that isn’t even including the new Territory Recovery mode, which adds a bunch of new content as well. It may have some of the same problems as the base game (more on that later), but it did at least provide me with hours of fun. 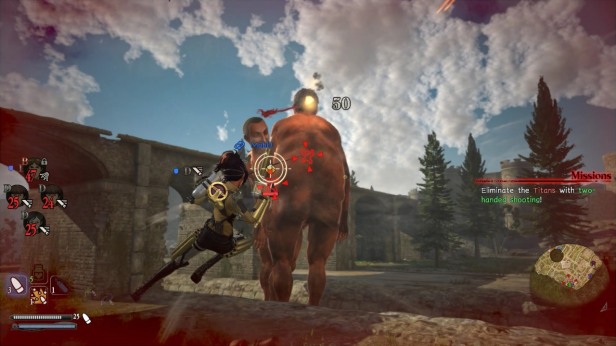 Branching storyline. One thing Final Battle does differently from the base game is how it handles its story. The story covers the events adapted in season 3 of the Attack on Titan anime, which is arguably the best part of the series (at least I think so as a manga reader). However, instead of telling it in a relatively linear way like the base game, it is told in a series of branching paths, all through the eyes of different characters. There are three of these paths, all of which end at the same point, but all of which provide more detail regarding different sides of the story. I won’t go into spoiler territory, but I will say that it does a pretty good job going through each side to the story. It’s not as good a story experience as the manga or anime, but it’s definitely still fun to play through if you’re already a fan.

Issues with the base game still remain. Unfortunately, Final Battle carries over many of the issues that the base game had. This includes the constant gameplay interruptions, forced camera lock-on when targeted by a titan, and the various AI issues with both allies and enemies. However, there’s one issue in particular that feels much more pronounced in the DLC — that being the lazy enemy designs. While killing titans over and over can be fun, what isn’t fun is when the game throws a special titan at you, one with a massive pool of HP. These titans are not at all difficult to kill if you can manage a regular titan, but they are 10x more time-consuming to kill. 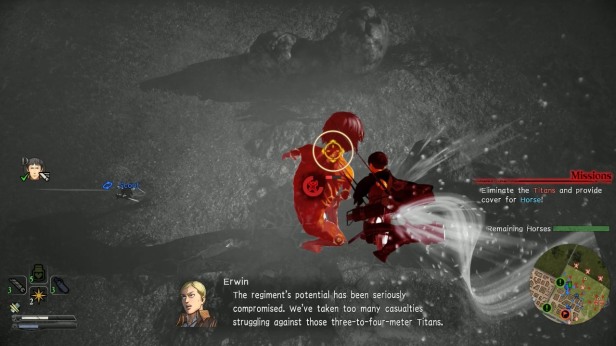 In fact, there was a boss fight in one of the later levels that took me almost 15 minutes to clear. That 15 minutes was just me avoiding the same attack over and over and slicing the titan’s nape when necessary. There was no way I was going to lose the fight, I just had to spend the time to actually finish it. It’s a lazy way of inflating game time and is one of my main issues with both the base game and this DLC.

Loss of customization. One aspect of the base game I really enjoyed was being able to make my own character, customize said character, and experience the story from this custom character’s perspective. The DLC removes this customization entirely, giving you a predetermined set of characters and loadouts to choose from when progressing through the story. As a result, the story is largely told the same way as it is in the anime and manga, without this outside perspective to it. While it’s still a great story, it is a bit of a shame that it comes at the expense of losing all of the customization provided in the base game. 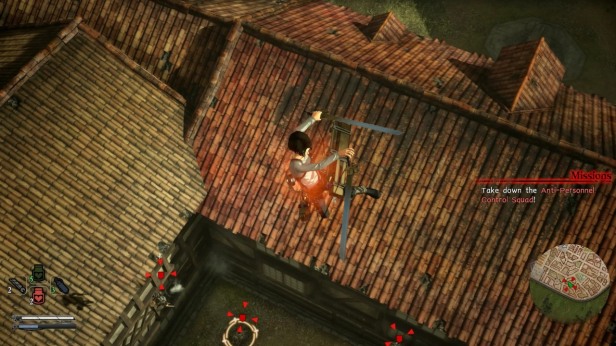 Unintuitive gun controls. One of the major new additions in Final Battle is an entirely new form of combat. Instead of taking down titans with blades, you can take them down with guns. Swapping between the two can drastically change the way you approach certain combat situations, but despite how fun it can be to mess around with the guns, I still found myself sticking to the tried-and-true combat style. This is because the gun controls just aren’t intuitive and actually make most scenarios more difficult than they need to be.

My main issue is with how the targeting works. Normally, when you’re attacking with blades, you pick a specific spot on the body and reel in towards it to attack. Of course, you would want to target the nape to actually get the kill. With guns though, the body part targeted is whatever is closest to you. This makes it necessary to be both above and centered behind a titan to actually land a clean shot at its nape. There’s no attaching to the neck and flying around for that easy kill, you have to position yourself manually. On top of that, titans flail around so much that it’s hard to do so even when it looks like you have a clean shot. It just doesn’t feel anywhere near as intuitive as the regular controls.

For fans of the base game, this is pretty much more of the same. You lose the customization, but get to experience a story that is much better than what preceded it. However, the DLC does carry over several of the issues from the base game, a couple of which felt more pronounced in the DLC. Regardless, it is a fun experience and definitely worth playing if you like Attack on Titan.

It is worth noting that Koei Tecmo did pull the original game from sale, so you can only purchase it bundled with the DLC for its full price at $60 (compared to the $40 that the base game was being sold at this time last year). On top of that, the DLC upgrade for those that already own the game is $40, so you’re effectively getting a much better deal if you had not purchased the game prior to the the DLC coming out. It’s a pretty questionable move on Koei Tecmo’s part, but considering how fast the original was discounted, I would advise waiting for a sale before picking it up.

You can buy Attack on Titan 2 on Steam here.