Remember when games were developed just to be fun and nothing more? When story, graphics, and sound didn’t really matter as long as the game was fun? That’s pretty much what Earth Defense Force 5 does. It’s a game that maximizes fun over everything else and I’m kicking myself for not getting into the series earlier.

Note: This is a review of the singleplayer side of the game only.

Incredibly satisfying gameplay. Earth Defense Force 5 (which I’ll be referring to as EDF5 from now on) has some rather simple gameplay. It really just boils down to “kill all the aliens to clear the level”, but that process is so satisfying that you hardly notice its simplicity. It is a game designed to maximize fun and it shows. You’re able to fly around giant hordes of ants and blast them with power lances, dash around giant frogs and shotgun their legs off, and even mow down an onslaught of UFOs using your 15-missile homing launcher. There are also a bunch of little features that add to the experience, like having infinite ammo and being able to call in vehicles at will.

It’s a kind of stress reliever of sorts, just being able to mow down waves upon waves of enemies in the most spectacular fashion. In fact, I would compare the experience to that of a Musou game. However, unlike Musou games, EDF5 actually has some variety in its level design. You’ll go from defending a mansion in the middle of a city, to wiping out an underground enemy nest, then back to the surface to take out a mobile fortress deploying endless amounts of enemies. It makes for some incredibly satisfying gameplay that never really grows old. 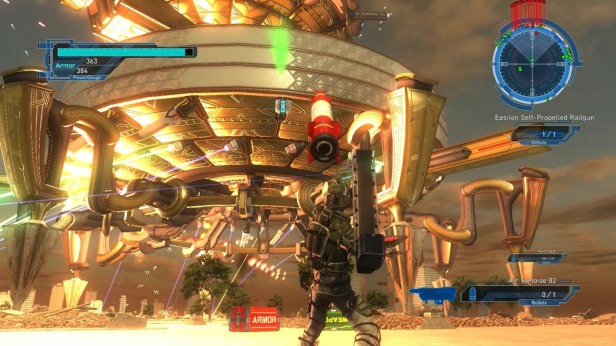 Vast array of weapons to choose from. Part of the reason why the gameplay works so well is just the vast amount of weapons you can choose from. There are shotguns, assault rifles, missile launchers, homing launchers, grenade launchers, sniper rifles, and even a bunch of special weapons like the acid shower and nanomachine sprayer. And that’s just on the ranger class, there are three other classes that all have their own unique weapons and other support items.

You are continuously introduced to these items throughout the course of the game. And once you’ve unlocked all the weapons, any weapon pickup that you find will upgrade that weapon instead. In this way, the game continues to reward you for running around and picking up those boxes. I never got tired of doing so and spent countless hours trying out new weapons and weapon combos.

Campy humor. EDF5 actually does have a story, which is surprising given how random its levels are. However, that story is also incredibly random and full of a bunch of campy humor. Some may be put off by it, but I felt that it really added to the experience. To give an example: you start the game as a civilian within an EDF training facility. This facility get attacked and you are thrown a weapon and told to defend yourself while you are escorted to a safe place by other soldiers. Twenty levels later, those soldiers still haven’t found you that safe place and you’ve somehow ended up as a top EDF soldier. It doesn’t make a whole lot of sense, but it definitely fits how random the levels can be.

On top of that, EDF5 features some top-tier dialogue. You’ll hear classics like “are those aliens?” from soldiers that have been fighting aliens for several levels and “I can’t shoot it, it looks just like me, a human!” as giant bipedal frogs that look nothing like us drop from the sky. I don’t know how they’ve done it, but the dialogue is so dumb here that it actually adds to the experience.

Polished PC port. Given how much stuff can be on screen at once, it’s actually kind of impressive how well the game runs. There could be hundreds upon hundreds of enemies in front of me and I would still be at that steady 60fps. Sure, it did dip occasionally, but that only happened maybe four or five times during my playthrough. It’s pretty well-optimized as far as PC ports go. Of course, the drawback being that the graphics are from the PS3-era, but again, this is a game that prioritizes gameplay above all else.

And speaking of PC ports, EDF5 also features keyboard and mouse controls that actually work and feel good to use. Every button is rebindable and you can even configure controls per class and per vehicle type. Given that most PC ports simply tack on these controls, I was rather impressed with how well they played here. 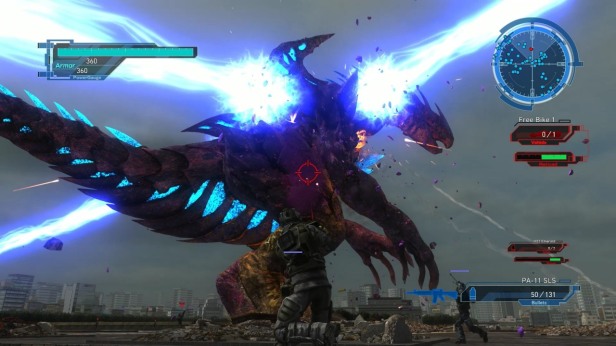 Fluctuating difficulty. Although I did like the random nature of EDF5’s levels, it does unfortunately result in some wildly fluctuating difficulty. You would think that the levels would be structured in a way that gradually increases difficulty, but EDF5 throws that idea out the window. I would be absolutely killing it for like four or five levels on a harder difficulty, then hit a wall on some level that is hard even on the game’s normal difficulty, only for the game to then revert back to the difficulty prior. What makes it worse is that some levels that look like they might be hard actually aren’t and some levels that look easy are anything but that. Exterminating a massive underground enemy nest? Easy. Taking down a couple pylons on the surface with plenty of cover? Much more difficult. The difficulty is completely random and just doesn’t feel right at times.

Wonky vehicle physics. EDF5 has some incredibly wonky physics, enough so that I would say that it adds to the game’s charm. However, when it comes to vehicles, it’s anything but helpful. The most prominent example would be the game’s bike. When driving it, the slightest bump or turn can send you flying, making it borderline unusable in most scenarios. I loved using the bike when it worked, but had to be very careful when driving it less I want to be thrown into a horde of enemies. Most of the other vehicles are heavy enough to avoid this problem, but they can run into some issues of their own. 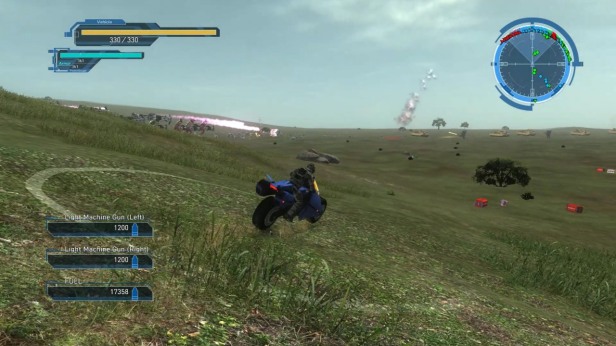 Although it does have a few issues, Earth Defense Force 5 is an incredibly fun experience. By not focusing so much on the story, art, and other aspects, EDF5 is able to focus solely on what makes video games fun: its gameplay. Mowing down hordes of enemies is always satisfying, the weapon variety is great, and the campy humor somehow adds to the experience. And to top it all off, the PC port is actually pretty good. As my first game in the series, I’m surprised it’s taken me this long to check it out.

You can buy Earth Defense Force 5 on Steam here.