It has only been seven years since the original release of Sniper Elite V2 and we are already getting a remaster. Along with the gameplay that defined the original, the remaster also brings along with it some upgraded graphics, all of the DLC, and even a new photo mode. However, one has to wonder if this remaster was even necessary, especially for a game that didn’t even look that bad.

Note: This is a review of the singleplayer experience only. The multiplayer is pretty much dead if you don’t already have friends to play it with.

Excellent sniping mechanics. Given that this is what the series is known for, it should come as no surprise that the sniping mechanics are top-notch. In fact, this game is now seven years old and still has better sniping mechanics than many modern-day shooters. It does so by combining a realistic approach to the act with a bunch of other fun additions. Shots not only take into account distance to target, but also wind direction and strength, all of which need to be considered in order to land that perfect shot. That or you can just blast away and hope that a shot lands, whatever fits your play style.

However, it isn’t just the realism here that makes the sniping fun, the game also adds a bunch of neat features to spice up the experience. One prime example is the different points assigned for hitting certain parts of the body. You can easily get a decent amount of points by landing consistent headshots, but you can earn just as much, or even more, if you aim directly for the eyes. You could also just not aim for the head at all and instead aim for the grenade attached to your target’s belt, which does ignite him and any surrounding enemies. All of this makes a fun, yet realistic sniping experience, even seven years later. 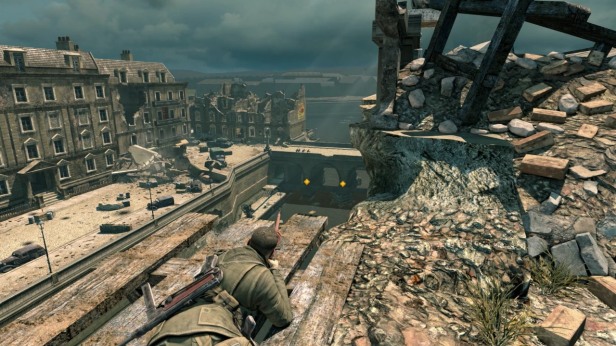 Satisfying killcam. In addition to the sniping mechanics, the Sniper Elite series is also known for its killcam feature, and for a very good reason. Lining up and landing that perfect shot is satisfying enough, but seeing the shot travel and enter someone’s skull in slow-mo just makes it that much more satisfying. It doesn’t get old either — it’s just as satisfying at the beginning of the game as it is at the end and everywhere between.

New to this remaster though is the photo mode, allowing you to take the killcam one step further. By pressing ‘P’ at any time, you can pause the action and enter photo mode, which allows you to apply different filters, frames, and other photo adjustments to get that perfect screenshot. It’s actually fairly complex with what it lets you do, even allowing you to frame step ahead if needed. Sure, this is a feature that most will likely not use, but it’s still pretty fun to mess around with and a nice addition to this “remaster”.

Unnecessary remaster. The main issue with Sniper Elite V2 Remastered is that it simply doesn’t have much of a reason to exist, at least on PC. This is a remaster to a game that already looked pretty good on PC and isn’t even that old. Sure, there’s the additional features like the photo mode and the new playable characters, but the graphical improvements that are here are so minimal that it’s honestly hard to tell at a glance what has changed. The most notable is probably the higher-res textures, but at that point, it just feels like we’re being sold a glorified texture pack instead of a true remaster.

What makes it worse is the fact that this texture pack is being sold at $35, a price well above the $6 that you could pick up the original for during any of the Steam sales the past several years. Rebellion has at least offered the option to upgrade from the original for $10, but that honestly should be free considering how little has changed. New fans to the series are the real victims here though, as they now have to pay full price for the game since Rebellion pulled the original V2 from sale. That or wait for this “remaster” to drop to the same price, which will likely take a few years.

I don’t normally discuss game prices in my reviews, but I felt the exception was needed here, as this remaster honestly felt like a cash grab more than anything.

Awkward level design. The problems don’t just stop at the “remaster” part of the game though — the original also had its fair share of issues that remain with this remaster. The biggest of these issues would have to be the game’s awkward level design. I say awkward, but that is only because the game doesn’t seem to know if it wants to be a stealth sniping game or a supersoldier simulator. In some levels, stealth is definitely an option, but in others it’s oftentimes impossible to do so, even if it looks like you could.

Part of this is due to the fact that if you ever fire your sniper, the entire level is immediately alerted to your position. In order to actually stealth through these areas, you’ll have to get close enough to use your silenced pistol or take advantage of other sound distractions the game provides, which it only does for a few levels. However, even on those levels, there are a few other gimmicks preventing stealth from being a real possibility. For example, enemies can oftentimes see you from behind cover, even from far away. The game also had this really annoying tendency to spawn enemies close to you once you’ve crossed an invisible line, making it difficult to maintain stealth if you haven’t already memorized spawn locations.

For a game that’s seemingly built on stealth gameplay, the stealth mechanics and overall level design definitely don’t do it any favors.

Awful cover system. To go along with its stealth issues, Sniper Elite V2 Remastered also features an awful cover system, one that quite honestly borders on being outright broken. Aside from enemies being able to see you from behind cover, you’re also unable to take cover while standing. If you try to do so, you will be forced into a crouched position, even when at the edge of a doorway or some other opening that you could easily peek around the side of. This pretty much makes the mechanic useless in some areas and even when it is useful, it’s oftentimes just not worth it considering how gimmicky it can be. You would think that a remaster would maybe have brushed up on it to make it a bit more intuitive, but it simply does not.

Various technical issues. On top of the issues I just mentioned, the game also has other smaller issues that I couldn’t really fit anywhere else. One such issue is the game’s weird soundstaging. By soundstaging, I mean the audio playing in a way that allows the player to determine its source direction and how close it is. Throughout the game I ran into numerous situations where it sounded like an enemy was right next to me, but actually ended up being behind several layers of walls to my right or left. For a shooter that relies heavily on sound, this is a pretty bad issue to have.

And on the topic of enemies, it should also be noted that they have some pretty bad AI. Expect to see plenty of enemies shooting walls, not noticing their buddy being shot right next to them, and really just being dumb in general. It really isn’t all that surprising given that games like this often don’t have the greatest AI, but it’s definitely still worth the mention.

Sniper Elite V2 Remastered is a decent game, but a completely unnecessary remaster. It’s basically a glorified texture pack being sold at a premium price, well above what you could pick up the original for anytime during the past several years. However, even then, the original game did have its fair share of issues that remain with this remaster. Given that the original has since been pulled from sale, I would definitely recommend waiting for this one to show up in a bundle in the next couple years or so — if you’re interested in it.

You can buy Sniper Elite V2 Remastered on Steam here.