As a fan of the Neptunia series as a whole, I have to say that I’m disappointed. Super Neptunia RPG is a game that showed a lot of potential, a game that I was hoping would be good. Unfortunately, it is anything but that and it pains me to say so.

Neptunia charm. The best thing about Super Neptunia RPG is the fact that it’s a Neptunia game. This means that, while we may not get the most well-written story, we’ll at least have a story full of fun characters, constant fourth wall breaking, game references, and all of the other wacky antics that come along with the series. I mean, the game even opens with Neptune doing her famous nep nep while sleeping. If you’ve ever played a Neptunia game before, you should know what to expect here — it’s pretty much par for the course.

Quality port. Despite the fact that Super Neptunia RPG looks like a mobile game, there was actually a lot of issues with it when it first released on the PlayStation 4. The loading times were long, there was a bit of stuttering, and even freezing was a constant issue. Fortunately, the PC version of the game has none of these issues. I was able to play through the entire game without ever running into a crash, freeze, stutter, or any of the issues that appeared to plague the original release. Granted, it definitely looks like a game that shouldn’t have these issues to begin with, but seeing as how these were common complaints with the original release, I thought I should point out how it compares.

Awful combat. Unfortunately, the biggest problem with Super Neptunia RPG is also one of its biggest features, that being the combat. The combat is very different compared to what we usually get in the series, this time taking the form of a real-time button masher, or as I like to call it, cheap mobile garbage.

In order to do anything you have to wait for “action points” to generate, with a certain number of points being consumed depending on the character and type of move used. For example, Neptune’s basic attack consumes two of these, so I would begin every fight by waiting for two to generate and then attack once they were available, repeating the process until the fight was over. This is pretty much how all of the early game combat works. As you progress, you eventually get more party members and a couple additional combat abilities, but even then, it really just boils down to pressing the same few buttons over and over and occasionally using an item or two. 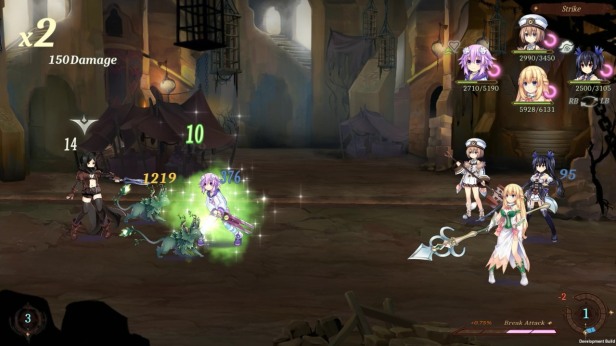 In fact, the game indirectly encourages this behavior through its inclusion of a speedup feature, which pretty much just puts the combat at 10x speed. I’m all for having such features, but in this case, it perfectly demonstrates the problem with the core combat: that being that it simply has no depth. Sure, you can play around with party formations and character abilities, but even then, the combat is so straightforward that it really doesn’t matter. I was actually able to clear the entire game by permanently using the game’s speedup feature and just spamming the same few buttons. On top of that, I did this with a sword I bought at the beginning of the game and never felt the need to upgrade. I may have died a few times during my playthrough, but the combat is so simple that it never really became a problem. The fact that there’s no difficulty option just makes it that much worse.

This is really the kind of combat I would expect from a cheap mobile game, not a higher-priced JRPG from a franchise that has done good combat before. For being one of the game’s central features, I was very disappointed with how it came together.

Extremely lazy quest design. To go along with it’s lackluster combat, Super Neptunia RPG also features some incredibly lackluster quest design. By lackluster, I mean that I started up the game for the first time and was immediately given five quests that took the form of simple fetch quests, a pattern that continues until the end of the game. When it’s not a fetch quest, it’s a “go kill this monster” quest, a “go collect a certain amount of this item” quest, a “go talk to this person and come back” quest, or something similarly lazy. In fact, some of the quests are as lazy as “hey give me 500 credits”.

They were so bad that I opted to barely complete any of them, losing out on a lot of potential experience points. Given that I was able to blast through the combat regardless, I began to question whether these quests were just tacked-on at the end of development or not. If anything, it felt like they were added in order to give the game a sense of substance where there really was none. Of course, this is counterintuitive, as all it leads to is a more boring experience overall.

Copy-paste level design. Unfortunately, the laziness with the quest design doesn’t end there, it also extends to that of the level design. While the art itself is definitely fine and even looks pretty good in some areas, the overall layout of each level definitely felt like it was being copy-pasted from elsewhere in the game. In fact, there are a few areas in the game that are 100% copy-pasted from previously-visited areas, with the only change being that of the skin applied over it. This makes exploration a bit of a drag at times, as you go into a new area with a general idea of where things will be. I can excuse copy-pasting stuff like inn rooms (which the game does do), but when it’s entire sections of the game world, it just feels lazy.

Wonky movement. While the port itself is mostly fine, the game does have some problems when it comes to movement. For example, I found that jumping in the game is not always responsive. I would oftentimes run up to a ledge with the intent of jumping a gap, but somehow end up not jumping at all. I don’t think this is some sort of input delay problem either, as the game is pretty responsive in other areas. On top of that, it is also a bit weird how the movement works when transitioning from a path in the background to a path in the foreground and vice-versa. It doesn’t always feel fluid and in some areas it looks like you can traverse between the two, but the game simply does not let you. These are some more minor issues, but still issues worth mentioning.

Super Neptunia RPG is a game that definitely could have been good. It has that distinct Neptunia charm to it, but it fails in several other key areas. The combat is bad, the quest design is bad, the level design is just lazy, and there are even a couple movement issues. Honestly, the only thing carrying the experience is the lighthearted storyline and fun characters. I would really only recommend this to diehard Neptunia fans, those able to get through the experience simply because it’s a Neptunia game. For those that aren’t really into the series, I would recommend staying far away.

You can buy Super Neptunia RPG on Steam here.