Following up on their last release, Sakura Sakura, Sol Press gives us yet another high school comedy/drama visual novel, but this time with a flight school motif. Not only does the setting provide for a relatively interesting story, but it does so with some good visuals and a really polished translation. However, it does suffer from some problems that often come with such visual novels.

Unique and interesting setting. What sets Under One Wing apart from similar visual novels is the setting it takes place in, that of a flight school. It still has all of the tropes and such that come along with visual novels set in a school environment, but the added element of flight definitely shakes things up a bit. For example, every character, the protagonist included, has their own plane and actually flies from their dorm to school in order to attend classes and such. It’s actually kind of ridiculous and doesn’t seem realistic at all, but at least it makes for an interesting setting.

However, it’s not like the game just takes this setting and paints it over the usual high school comedy, there’s actually a goal in mind for the protagonist and the different heroines. There’s this huge flight competition called “Fairy Fight” that they’re all gunning for and the road leading up to it makes up the majority of the game’s story. It does this while at the same time not sacrificing the antics that come along with high school set visual novels. There’s still the lighthearted cooking scenes, the beach scene, and even the completely unrealistic “accidents” like the protagonist falling over onto one of the girls. For those that have already played a few high school set VNs, this will come as nothing new, but the fact that it is seamlessly blended into the whole flight school setting really makes for an interesting experience.

Good visuals. Going along with its theme of “similar, but different”, Under One Wing also employs an art style that is similar to what we usually get from high school set visual novels, but has just a touch of style to it to set it apart. For example, characters are drawn with thicker lines and definitely with more gloss, especially with regards to hair. That’s not a bad thing either, it gives the game its own aesthetic and it definitely looks great for the type of story it’s telling.

So not only are the character designs and backgrounds well-done, but they also scale well with resolution. The game may only run at 720p, but when scaled to 1080p, it doesn’t even look that bad. There’s no jagged edges and very little blur, even when CGs are zoomed in on. The game may not have the most unique visuals around, but its definitely different from what I’d usually expect from the genre.

Polished translation. With Under One Wing, Sol Press has once again shown that they can provide a top-notch translation. Usually, when I play through a visual novel, I take screenshots when I run into typos or other grammar issues. With Under One Wing, I finished the game with no such screenshots. The typos and grammar issues either completely escaped me or simply didn’t exist, the latter of which I’m more so leaning towards.

On top of that, the game also allows the player to toggle honorifics, satisfying both those that like a reading experience more true to the original and those that prefer a more localized experience. This is a feature strangely lacking in most modern visual novel releases, so I’m glad that Sol Press is continuing to set the standard here. Combined with the solid translation and you get a pretty polished reading experience.

Formulaic and cliched character routes. Unfortunately, while the common route was decent, the game does falter when it gets to the character routes. There are several reasons why this is the case, but it mostly comes down to their formulaic presentation, reliance on cliched tropes, and pacing that feels like it goes out the window at times. For example, one route relies on the classic “childhood promise since forgotten”, which the game then uses as an excuse to ramp up the pacing considerably. Another route has you confess and then immediately move into a series of H-scenes without any sort of buildup, making it feel like the character was included simply for those scenes to have a reason to be there.

Of course, all of this is done in a rather formulaic way across all of the character routes. First, there’s the sudden confession, some of which felt more natural than others, but all of which felt rushed. Then there’s the H-scenes to follow that confession up. The amount of these scenes depends on the character, but it was usually two or three. Then the route immediately moves into drama territory, taking full advantage of the hints dropped during the common route. Some of this drama felt unnecessary, but at least it was bearable. And finally, the route finishes up with the climatic competition scene, a scene that really isn’t all that exciting once you’ve experienced it through another route.

Granted, the whole flight school motif does make all of this at least a bit more interesting, but it was still very disappointing to see this drop in quality, especially compared to the relatively well-done common route immediately preceding it.

Meaningless choices. One thing that I’ve never been a fan of in any visual novel are choices that really don’t do anything. By this, I mean those choices you make that maybe affect two or three lines of dialogue and don’t serve any purpose beyond that. Under One Wing is a visual novel full of these, with only one choice towards the end determining what route you fall onto. To me, these meaningless choices just feel like a cheap way to make the player feel like they are involved in the story when they simply are not. It’s definitely a more minor complaint, especially given the genre, but something I feel should be mentioned regardless. 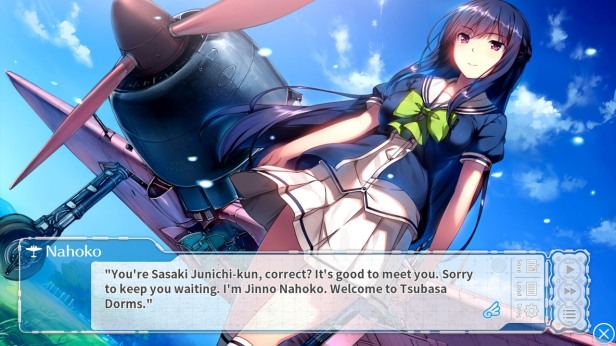 For a high school comedy/drama visual novel, Under One Wing is definitely better than average. The whole flight school motif, good art, and polished translation all help in that regard. However, the game does drastically decrease in quality once you get to the character routes, a disappointment considering the pretty stable quality of the common route. Regardless, it still makes for a decent read overall, so I’d recommend checking it out if the price is right.

You can buy Under One Wing on Steam here.