Idea Factory is back once again with another Compile Heart PC port, this time for a JRPG that released just a few months ago on PS4. Death end re;Quest brings with it some incredibly fun combat, an actually decent story, and even a good English dub. However, the level design really isn’t all that good and the story does falter towards the end.

Fun combat system. Starting off with my favorite thing about the game: it’s combat system. Like other Compile Heart games, the combat is done in a turn-based manner, but here it is done with the added twist of movement. Not only is the player able to move their character freely across the battlefield, but positioning plays a very important role in how these battles turn out. For example, some moves only have an effect on those right in front of a character, whereas others may have effects from the other side of the field.

Building on that, the game also has an incredibly fun knockback mechanic to play with. If you hit an enemy three times with an attack that has a knockback attribute to it, that enemy will go flying back a certain distance depending on its weight (which can be modified with certain abilities). If that enemy collides with another member of your party, they will do a knockback of their own. You can essentially chain knockbacks together like this if you position your party correctly, leading to some encounters that end up just being giant pinball battles. It was incredibly fun to play around with and provided for a very cool take on the turn-based combat we usually see in Compile Heart titles.

On top of that though, the game does all of this without feeling overly complex. It’s definitely not as complex as Omega Quintet or Dark Rose Valkyrie — the latter of which was too complex for its own good — but it doesn’t feel stupidly simple either. It strikes a nice balance there, providing combat that is both fun and easy to pickup, yet maintains a certain sense of depth for those seeking more. Out of all of the Compile Heart games I’ve played, the combat here in Death end re;Quest ended up being my favorite.

First half of the story. Normally, I’m one to criticize Compile Heart’s writing, but they actually managed to pull off a decent storyline here in Death end re;Quest, at least for the first half. The story is told through two different protagonists, one within the game and one back in reality, with the latter trying to figure out the mystery behind the game while the former tries to escape said game. These two cross paths early on and the story moves on from there, providing a pretty cool mystery/thriller mashup full of twists and turns.

It’s worth noting that the game is effectively a hybrid visual novel, with the dialogue and story scenes making up about half of the experience. As such, Compile Heart’s decent writing here actually made for a pretty good story experience, one that didn’t feel like it was constantly taking me out of the gameplay. I was genuinely interested in where the story would go and enjoyed such scenes, even if said story did slowly deteriorate (more on that later).

Actually decent English dub. I’m usually one to play with the original Japanese voice acting, but I opted to go for the English dub this time around. That is because the dub here is actually pretty good for a JRPG of this scale. It’s not overly acted, nor does it feel flat. There’s just the right amount of emotion to convey the story the game is trying to tell. It does falter occasionally, but never goes overboard like other English dubs tend to do in such games.

Uninspired level design. This is a problem with pretty much every Compile Heart game, but Death end re;Quest is a notable example: that being that the environments are simply boring. Not only are they bland visually, but the level design itself is also pretty uninspired and even outright lazy at times. Many areas just feel copy-pasted, the path is oftentimes very linear, and even the act of finding treasure is not all that exciting. Really, it’s hard to get excited over finding items on the map when they’re so lazily placed that it just feels like a chore to pick them up.

On top of that, the game’s excessive use of invisible walls is really just frustrating at times. It seemed like in every single level there was some area that looked like it could be explored, only for some invisible wall to shut me down. You’re even given the ability to jump, but it’s practically useless outside of two or three specific areas in the game, as otherwise you’re stopped right in your tracks by another invisible wall. The game could easily have made use of this ability to make its treasure hunting more interesting, but it simply does not.

Of course, that’s just the level design side of things. When you get to the graphics, you’re met with some incredibly repetitive textures and even recycled enemy models from previous Compile Heart games. Again, this is something that Compile Heart really has trouble with, so if you’ve played one of their games before, you’ll pretty much know what to expect here.

Second half of the story. Unfortunately, the story here in Death end re;Quest completely derails by the time it is over. While I did like the first half, it just grew so convoluted and ridiculous towards the end that it honestly became laughable. I won’t go into further detail to avoid spoiling it for potential players, but I will say that the story definitely progressed way too quickly for how ambitious it became. It definitely wasn’t bad, but the quality was nowhere close to that of the first half.

Misplaced tone shifts. While the story does have its moments, it is unfortunately plagued by some incredibly random tone shifts. There are several parts of the story where things seem to be going fine, only for the game to throw some random act of violence at you, completely going against the tone established in said scene. For example, there was one point in my playthrough where the story went from having a character strangled to death to a lighthearted fanservice scene just a few minutes later.

These drastic tone shifts were not only misplaced, but even felt tacked-on at times. It was like the game had to maintain this darker atmosphere just for the sake of having one. Of course, this, coupled with the numerous fanservice scenes, really puts the game in a sort of identity crisis. I don’t have anything against excessive violence or fanservice, but Death end re;Quest really just needed to pick a side and stick with it. That or somehow incorporate the two without it feeling like they were contrasting one another, which I imagine is a difficult task. 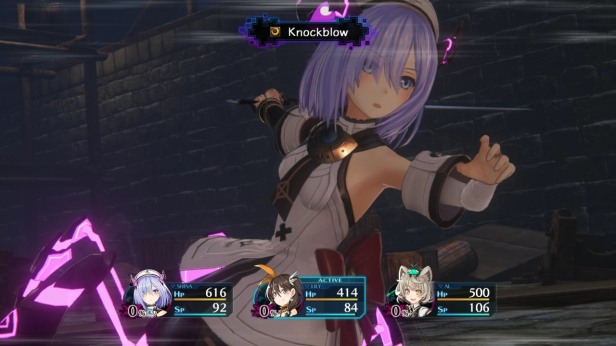 Although the story does falter towards the end, Death end re;Quest is still a pretty fun experience. The combat is some of the best I’ve seen in a Compile Heart game, the story was pretty interesting for the most part, and even the English dub was nice. However, the game is plagued by its seemingly random tone shifts and Compile Heart’s boring level design. Regardless, the PC port was well-done and I did have fun with the game, so I do recommend it, but be prepared for a lot of reading!

You can buy Death end re;Quest on Steam here.