The House in Fata Morgana proved to be quite the journey for me. It took me nearly three months of on-and-off playing to finally clear, but in the end, it was totally worth it. Not only does the game provide an excellent story with a great sense of atmosphere, but it also does so with a unique art style and a soundtrack that quickly became one of my favorites.

Unique art style. Most Japanese visual novels nowadays have a very distinct “anime” style, which, while not bad, can get a bit tiring, especially given the little difference between most of them. The House in Fata Morgana, on the other hand, immediately sets itself apart from the crowd by employing a unique gothic art style. The characters are drawn in such a way that they still look like they come from a visual novel, but they also have that stylistic gothic touch to them, creating this unique artistic blend that really lends itself well to establishing the game’s dark atmosphere.

It’s not just the characters though, the background art also manages something similar. There are some scenes that take real-world environments and apply a stylistic filter, other scenes that are clearly drawn in the same vein as the game’s characters, and even some more abstract scenes that help in conveying certain elements of the story. I had never played a game that looked quite like this, so it did take some getting used to, but I grew to appreciate how well it worked for the story it was trying to tell. 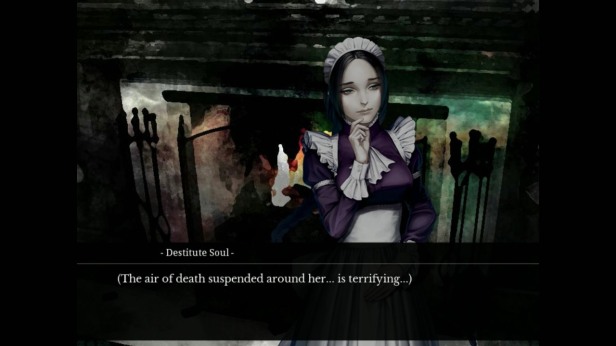 Great use of atmosphere. On top of its unique art style, Fata Morgana also provides a dreary atmosphere to match it. In fact, I like to compare it to that of Danganronpa, but with one key difference. Whereas Danganronpa is a game where hope and despair clash, The House in Fata Morgana is basically that, but without the hope. It’s pretty much just constant despair with little sprinkles of hope scattered about.

Not to say that that’s a bad thing though, I actually felt like it made for a much better story. Being in a constant well of despair can really show the depths of the human heart, a topic that the game heavily focuses on. It touches on several serious topics as a result and there’s a very good reason why there’s a disclaimer at the beginning of the game despite being released as an “all-ages” title. The game really just takes full advantage of this atmosphere and manages to craft a brilliant story around it.

Excellent storyline. Of course, the game’s atmosphere would have been completely wasted had the storyline not been up to par, but fortunately, The House in Fata Morgana manages to do this and so much more. It provides a story full of well-written characters, takes place in a setting not often seen in the genre, and manages to maintain a certain degree of complexity without feeling convoluted. Considering how long the game is, that last point is actually rather impressive, as many visual novels tend to lose focus over the course of an extended runtime. Fata Morgana, on the other hand, manages to avoid this problem, fully developing its characters while at the same time maintaining a relatively steady, yet slow pace throughout. It makes for an exceptional story that is further bettered by its use of atmosphere. 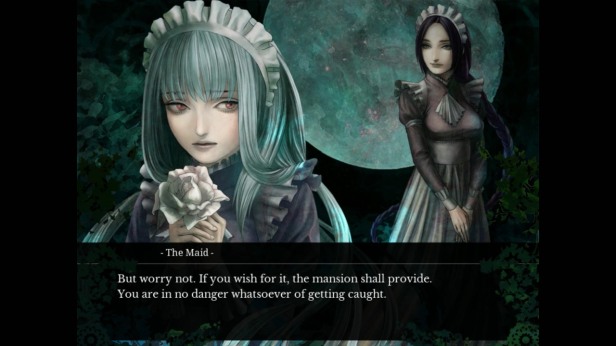 God-tier soundtrack. I am a huge fan of soundtracks for games, movies, TV, and other entertainment. I listen to them everyday, whether I be doing work, reading, or writing reviews like this. In fact, the genre has pretty much shaped my taste in music over the past several years. As such, I cannot overstate the genius behind Fata Morgana‘s soundtrack. Simply put, The House in Fata Morgana has one of the best soundtracks I have ever had the pleasure of listening to across any medium, be it movie, game, or otherwise.

It’s not only incredibly varied, but also perfectly matches the game’s atmosphere. There’s the somber, slow piano tunes, the ominous, atmospheric pieces, and even some more upbeat, colorful tracks for the few happy scenes in the game. On top of that, there are a bunch of vocal tracks mixed in there, some seemingly full of hope, and some that just bring you right back to despair. The game’s soundtrack is as much a roller coaster as its story in terms of emotions.

In fact, at times it even felt like the music was matching the pace of the events unfolding on-screen, creating a very immersive experience. Despite this, there were still several moments in the game where I stopped reading just to appreciate the music playing during that scene — it’s just that good even on its own. This is not something I take lightly either, this is the kind of soundtrack I would compare other soundtracks against to judge their quality.

Lossy soundtrack compression. Despite all of the praise I’ve given the game’s soundtrack, it unfortunately comes with one major drawback: that being that it is only available in a lossy format. This is incredibly disappointing to see, especially because this compression is quite noticeable on some tracks.

You would think that this problem would be solved on the game’s official soundtrack release, but it unfortunately is not. The quality is a bit better there, but is still about the same quality you’d get from a YouTube video. It’s really just a shame that a soundtrack as good as this is barred behind a lossy master. Maybe one day we’ll see a full lossless release, but as it stands, we’re stuck with the compressed version.

While the beginning may be a bit hard to get through, the overall story is definitely worth the read. From the game’s unique art style, to its masterful use of atmosphere, there’s really a lot to like here. On top of that, the soundtrack is one of the best I have ever listened to, both in and outside the medium. It’s one of the more unsettling visual novels I’ve played, but it is masterfully crafted as such and definitely earns my recommendation.

You can buy The House in Fata Morgana on Steam here.