The Fate franchise is back on PC, this time with a new entry in the Fate/Extra series. The game combines the visual novel aspect that the franchise is known for with the hack-and-slash genre, providing for a very cool mix. The combat is satisfying, the characters are fun to play around with, and the mission design is actually pretty decent for a hack-and-slash game like this. However, the game does have some issues, mainly on the more technical side of things.

Satisfying combat. Considering that Fate/EXTELLA LINK is a hack-and-slash game, the combat should be the game’s top priority. Fortunately, it does a great job delivering on that front, providing combat that is both fun and doesn’t feel like you’re just cutting down paper enemies. By that, I mean that hits actually feel impactful and provide ample feedback, something sorely lacking in similar games. On top of that, the skills are fun to use and can be customized to suit one’s playstyle. I liked going all in, so I chose skills that allowed me to dish out a lot of damage quickly and skills that allowed me to dash through large groups of enemies. Overall though, the combat serves as a nice stress ball of sorts. When playing a hack-and-slash game like this, I’m usually not in it for too much of a challenge and enjoy just mowing down waves upon waves of enemies in the most spectacular fashion, which is exactly the experience I had here with Fate/EXTELLA LINK.

Great cast of characters. To go along with the game’s satisfying combat, there’s also a decently sized cast of characters to play around with, pulling from several different entries in the Fate universe. You have your characters from Fate/Zero, Fate/Apocrypha, Fate/Grand Order, and, of course, the original Fate/stay night. Each character is given their own special basic attacks, skills, and ultimate ability, giving the player plenty of options to choose from. The game also provides players with a mechanic called the “money is power system”, allowing newly unlocked servants to be leveled to match that of one’s highest-level servant. This allowed me to try out new characters as I unlocked them without being too underleveled — it was a nice way to allow for more experimentation when trying out different characters. 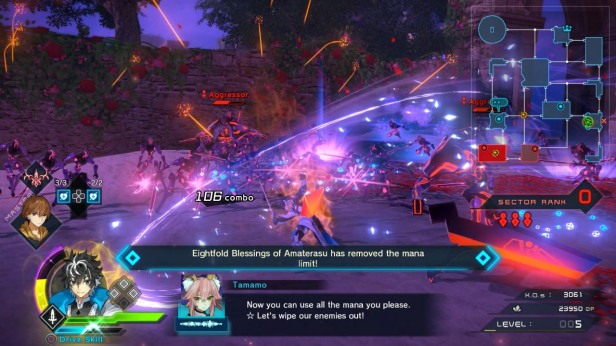 Actually decent mission design. Normally, a hack-and-slash game like this suffers from overly repetitive gameplay. While Fate/EXTELLA LINK can be repetitive at times, it manages to shake things up just enough to keep it interesting. This is largely due to the game’s surprisingly decent mission design. In one mission, I would be given a simple elimination task whereas the next I am hunting down EMP-like structures to restore the map, then followed up by another mission that has me searching for a servant amongst a bunch of shadow clones. Sure, the core gameplay does boil down to “move here, kill these enemies, and repeat”, but the different missions assigned to the player definitely make it more than just that. It may not be the best mission design, but it at least deserves a mention. It also helps that the game does not overstay its welcome – it is just long enough to provide a decent story without feeling like it was dragging on, a definite plus for a game with a heavy story side to it.

Lackluster AI. The Fate/Extra games obviously draw inspiration from the Dynasty Warriors series, bringing over what makes the Warriors combat fun, but also bringing along with it the dumb AI. In fact, I would say that the AI here in Extella Link is the worst of the two. Instead of staring at me for several seconds and then attacking like in the Warriors games, the basic enemies in Extella Link oftentimes just do not attack at all. Really the only enemies that posed a problem were those that had their own HP bars — the basic enemies were just there to be cut down on the side. Granted, I played most of the story mode on normal difficulty, but even then, I feel like the basic enemies should pose at least some threat, even if minuscule.

Constant gameplay interruptions. Mowing down large hordes of enemies can definitely be fun, but what isn’t cool is when the game constantly interrupts you in the process. I could not go five minutes without being interrupted by some short story segment, character introduction cutscene, or tutorial popup — it seemed like there would be no end to them. This felt prominent even towards the end of the game, at which point I had already seen most of the character intro cutscenes and would have to watch them again every time that character reappeared. It definitely put a damper on the flow of the combat and was rather frustrating to deal with.

Wonky controller support. Despite being a console port, Fate/EXTELLA LINK has several issues when it comes to controller support. Upon first opening the game, I had to spend about an hour jumping through hoops trying to get a controller to work before I could finally get started. At first, I had intended to use an Xbox One controller, which normally is supported in XSEED’s ports. However, the game would not recognize the controller as such and instead labeled it a “generic” controller, assigning all sorts of random bindings to it. I had to press start to dash and right stick to confirm menu changes, it was pretty bad.

Given that, I went into the game’s settings to look for a button prompts setting, to make it easier to rebind the controls. Unfortunately, there was no such setting, making it a mess of trial and error to configure the controller properly. Instead of letting the player freely assign buttons to different actions, the game limits your choices to a pre-defined list of buttons, with some actions only allowing a few different button choices. This not only makes rebinding more of a pain, but also limits accessibility for those not already using an external mapping tool. 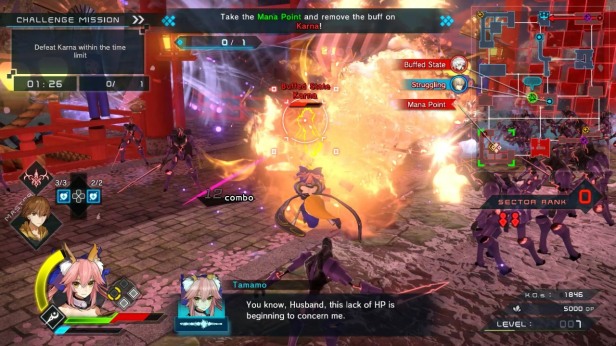 At that point, I just gave up and resorted to using a PS4 controller, which the game does support natively, but only when using a wired connection (it detected the controller as generic when using wireless). Even when using a controller, you’ll want to have a keyboard handy if you want to get past the character creation screen at the beginning of the game, as there is no on-screen keyboard for controller users. Considering how well XSEED usually does with their ports, all of this was very disappointing to see.

Technical issues. On top of the numerous control issues, the PC version of Fate/EXTELLA LINK also has some other technical issues, the main one being the frequent stuttering and micro-freezes. I noticed that whenever certain enemies spawned or when certain moves are used, the game would lag out a bit, slowing down the fps and sometimes even freezing for a second or so. In fact, there were some moves in the game where I could recreate the problem every time without fail, regardless of whether I was recording or not. It was not a game-breaking issue, but it was definitely prevalent enough to worth noting.

Aside from that issue, the game also had this really annoying tendency to move my mouse cursor to the center of the screen whenever dialogue or some other menu popped up, remaining there until I moved it away. I played through the game with a controller, so this grew rather frustrating, especially so considering that I disabled the use of the mouse in the game’s settings and it still continued to move over. It was just a couple months ago that I praised XSEED’s work on SENRAN KAGURA Burst Re:Newal, so I really don’t know what went wrong here, but hopefully we can see some patches to smooth out these issues. 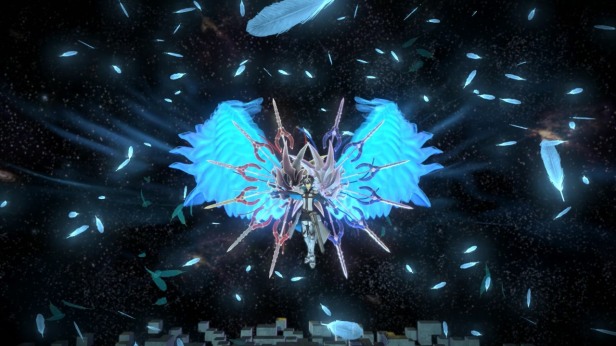 Fate/EXTELLA LINK may not be the best in the genre, but it’s definitely decent enough to warrant checking it out. There’s a lot of characters to play around with and the combat itself is also pretty satisfying. However, the lackluster AI, constant gameplay interruptions, and technical issues do put a damper on the experience, so while I do recommend the game, you may want to pass it up if you are not already a fan of the genre and/or franchise.

You can buy Fate/EXTELLA LINK on Steam here.