God’s Trigger is basically what you would get if you took Hotline Miami, upped the graphics a bit, and added in co-op and a cool skill system. It’s very stylistic, fast-paced, and bloody, providing for a very cool co-op experience. I had the opportunity to play an early release of the game, which contains both the prologue and chapter one. As such, these impressions will be based on that version of the game.

Let’s start with the game’s graphics. It takes a more “modern” look compared to the aesthetic we usually see in the genre, blending elements of realism with a more stylistic cartoon side. The result is a pretty nice art style that not only fits this kind of gameplay, but is also well-designed on the technical front. By that, I mean that items, objects, etc. are usually pretty easy to see on the background. There were only a couple times where an enemy caught me off-guard due to them blending in with the background, but it also felt like those couple instances were intended, as the enemies were positioned to ambush me.

As for the actual game, it’s very polished for a twin-stick shooter. Hits feel impactful, enemies are varied, and the level design provides players with quite a few options to consider when progressing. On top of that, the game has this entire upgrade and skill system to play around with, providing players with even more customization when it comes to gameplay. I had fun trying out different skills and perks on the game’s two characters. In fact, my friend and I even played through the game a second time just so that we could swap characters and try them out. Even when we did die, the game’s checkpoints were forgiving enough to allow us to jump right back in, providing yet another incentive to get creative and try things out. 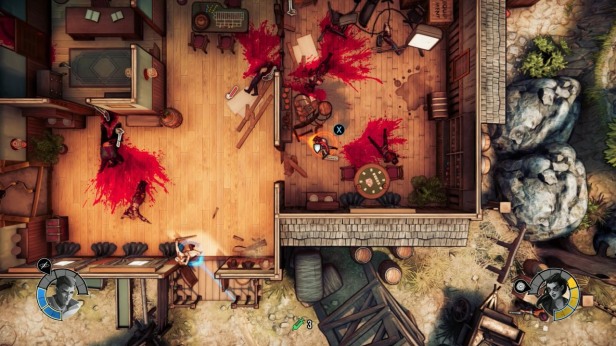 On the more technical side of things, the game is nicely optimized, which really is not all that surprising considering that this is a Unity-based game. Even so, it is worth noting that we ran into no frame issues, crashes, stuttering etc. – it was pretty much smooth sailing the entire time. It’s always nice to see a game that “just works” and God’s Trigger seems to be doing fine on that front.

If I had to complain about something though, I would say that the skills and abilities are not quite balanced. There are some abilities that are clearly better and easier to use than others, making it really hard to justify picking otherwise unless if you are just messing around. For example, the “mind control” ability is a bit cumbersome to use, so both my friend and I abandoned that one pretty quickly in favor of other abilities. Granted, this could likely change before the game’s official release, but as it stands, the game does have a bit of a balancing issue.

That’s pretty much all I have to say about God’s Trigger. It was definitely a fun experience and one that I am looking forward to trying out again when the game fully releases. I only hope that the later levels can uphold the same level of quality as the ones present in this demo.

You can buy God’s Trigger on Steam here.

I was provided a review copy of this game. Read more about how I do my game reviews/impressions here.