The original Caligula Effect was released for the PS Vita back in 2016 and was not received well, earning a Metacritic average of 58/100. The Caligula Effect: Overdose is a complete remake of that game, coming out just three years after the original. It attempts to fix a lot of the problems plaguing that original while also adding several new additions of its own — some of which work, and some of which do not.

Cool and unique battle system. If there is one thing that Caligula does really well, it would have to be its unique battle system. In Caligula, whenever the player runs into an enemy, a battle zone is carved out of the area surrounding the player and said enemy, a sort of “pocket-dimension” if you would. Although the battles are done in a turn-based manner, they have a real-time element to them. For example, during the battle, enemies outside of the battle zone that happen to wander into it immediately jump into the battle, regardless of what was going on within.

The actual battle sequence itself is also pretty cool. Attacks are queued up on an “imaginary chain”, which shows how the battle would play out if every attack landed as intended. The player is able to adjust the timing of individual attacks, skills, or other actions along this chain before moving onto the next character in his/her party and repeating until all party members have actions queued. If everything lands properly, then the imaginary sequence will play out just as it was shown to the player.

It is a very cool gimmick and provides the player with a lot of options when it comes to battle. In fact, when I first started, I was overwhelmed by just how in-depth this mechanic could be taken, but it only took a few battles for me to get the hang of it. It really was a nice change of pace compared to the more traditional JRPG battle systems we usually get. 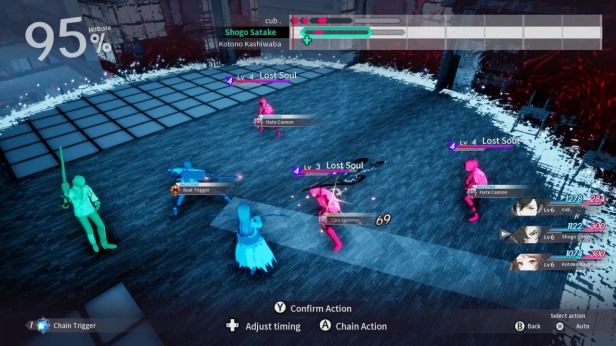 Nice music. Caligula is a game that makes heavy use of music. In fact, the storyline is built around it. As such, a lot of effort was put into the game’s music and it definitely shows. In place of a more traditional soundtrack during gameplay, the game instead makes use of a bunch of different insert songs, all sung by the in-game idol μ. μ is voiced by Reina Ueda, a prolific seiyuu that has had main roles in shows like Hanayamata, ReLIFE, and Trigger’s SSSS.Gridman. Not only is she a great singer, but each individual insert song is also produced by a different person, resulting in quite a bit of stylistic variety. You have your more laid-back, cheerful tracks and your intense, almost metal-like tracks — it definitely made each specific area feel unique if anything.

On top of that, there’s also this really neat feature when transitioning into battle scenes. By default, when exploring a dungeon, the instrumental version of the corresponding insert song is used. However, when a battle is initiated, the music smoothly transitions into its vocal version, providing for a really cool contrast between the two. This transition actually makes sense in the context of the game’s storyline, which I also thought was pretty neat.

Well-optimized port. I know that NIS America usually gets a lot of criticism for their PC ports, but I gotta give them at least some credit here for Caligula. Throughout my entire playthrough I ran into only one problem, that being a single instance of the screen blacking out until I left a certain area. Outside of that issue, I ran into no framerate problems, stuttering, or anything else that usually comes with poorly-optimized PC ports. They even included the option to change button prompts depending on your controller, a nice feature to have in console ports like this. It was a pretty smooth experience overall and considering that I played the game well before its official release, I feel that at least some credit is due here. 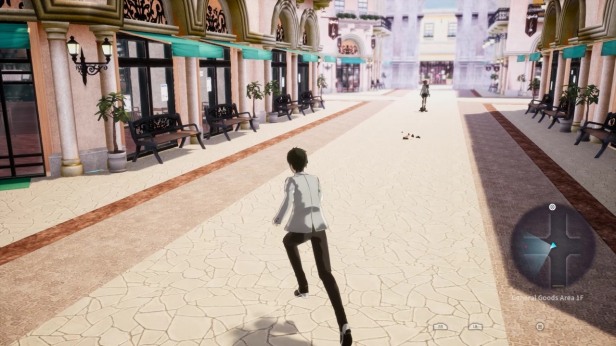 Poorly-developed storyline. So here’s the thing with Caligula’s story: I had already watched its terrible anime adaptation while it was airing a year ago, so I was definitely not going in with the highest of expectations. However, I thought that, given the increased length the game has over the anime, it would at least have some additional time to explore its different characters and such, resulting in a more fleshed-out overall story. Unfortunately, that expectation was proved wrong, as the story was just as bad, if not more so, than its anime counterpart.

There are plenty of reasons why this is the case, but the main one being the game’s complete misuse of its characters. Enemies and allies are constantly introduced, given the briefest of background stories, and then cut out of the story like that, giving no time for the player to feel anything for them. Many may not see this as too much a problem, but considering just how important emotions are to the game’s storyline, it’s a pretty big negative. In fact, the whole purpose of the game’s setting is to provide a place for characters to forget their many problems from reality and be happy within this virtual world, only for them to slowly realize that they cannot run from their problems.

Considering how central this element is to the storyline, the game definitely does not do itself any favors by creating so many cookie-cutter characters. It’s a character-driven game where the characters themselves are not interesting in the slightest, completely killing the rest of the story. I could go on about the other elements that make the story bad (such as the constant tone-shifting and lazily animated cutscenes), but those are trivial in comparison.

Illusion of choice. This is definitely a more minor complaint, but I have never really been a fan of games that include meaningless choices. By choices, I mean those dialogue popups that occur during story segments asking the player to give a response. These are pretty standard across a lot of story-driven games, but here in Caligula the vast majority simply do not matter. For the most part, I could choose any of the possible responses and the dialogue would still play out the same way. For example, if a “wrong choice” is chosen, a character will say “no let’s try this instead” and go with the right choice anyways. It is a lazy way of making the player feel like they have some contribution to the story when they simply do not.

Arduous trauma quest system. One of my biggest complaints with Caligula outside of its story would have to be just how overly tedious its trauma quest system is. In Caligula, the player is able to talk to, befriend, and even recruit any of the 500 or so students seen wandering around the virtual world. Each student is assigned a trauma quest, which, when completed, grants the player a stat bonus or some passive skill that can then be equipped. In theory, this system sounds great and seemed like it would be fun to play around with.

With this example you can clearly see how tedious the system can become — it really felt like it was designed solely to inflate the game’s playtime. It’s also tedious in the sense that, in order to unlock a character’s trauma quest, you have to speak with them three times. Considering that they often recycle dialogue across characters, all you really need to do is talk, skip, talk, skip, talk, and skip, as there is really nothing to be gained from reading their dialogue. So not only is the act of acquiring the trauma quests tedious, but completing them is also equally as tedious. The entire system really is just not worth the time.

Lack of music diversity. Yes, I included the music as both a pro and a con. That is because, while I did like the music, I did not like its lack of diversity. For the entire length of the game, all you have is 12 songs to listen to while exploring each dungeon. Considering that exploring a dungeon can take a few hours, that means that you will be listening to the same song for that many hours on repeat. Exploring would have been a whole lot better had there been maybe three or four songs per dungeon rather than just one.

Quality of life issues. For a JRPG, Caligula is a bit lacking in the quality of life department. My main complaint would be the lack of animation skipping while battling. When in battle, you are forced to watch every battle animation play out, even the ones that have their own special cutscene. Considering that the game provides a way to speed up regular cutscenes, it seemed a bit odd that they would not do the same for the ones while in battle.

Aside from that, I also disliked how the game boots you back to the main menu on death. This would not be so much a problem if I did not have to go through all of the logos that are cycled through on startup before I am able to load my save again. On top of that, a lot of the game’s settings can only be changed from the main menu. So if you are trying to configure your controls, you will have to repeatedly jump back and forth from in-game to the main menu and back, watching all of the startup logos each time you return to the main menu. It’s a minor complaint, but definitely worth noting.

Unfortunately, the unique battle system and nice music do not redeem the game from its other faults. The story is a mess, the trauma quest system is a complete waste of potential, and the game has quite a few quality of life issues. The port was at least nicely-optimized, but that is definitely not enough to save the base game from mediocrity.

You can buy The Caligula Effect: Overdose on Steam here.