MangaGamer is back once again with another mature visual novel courtesy of Steam’s recent policy changes. This time it is Kara no Shojo, a well-received mystery story set in 1950’s Japan. On top of having a great setting, the game also makes excellent use of its multiple routes and journal feature to tell a good story. Even so, the game does have some issues, most notably with its H-scenes.

Great setting and protagonist. Although I do not mind the high school setting seen in most visual novels, I really like it when a VN can tell a good story somewhere else entirely — something that Kara no Shojo does really well. Not only is the game set in post-occupation Japan, but it also drops the teenage protagonist in favor of an adult private detective. The story molds itself around this setting, unraveling a mystery that really fits the time period. There are no cell phones, no surveillance cameras, and no computers to make the investigation any easier. As such, the mystery is much more interesting to see unraveled and is a very welcome change of pace from the tried-and-true setting and protagonist seen in most VNs nowadays.

Excellent use of multiple routes. Although Kara no Shojo has only one true ending, that definitely does not make the other routes a waste of time. In fact, this is one of the better examples of a multi-route mystery, as the game manages to fill in gaps and provide new information across just about every route, even those that result in a bad ending. It is actually during these extra routes that a lot of the character development is done, providing for a really fulfilling story if played in its entirety. You can beat the game without experiencing any of these extra endings, but that would be doing yourself a disservice. The story is complex, so the multiple routes and endings really help in fleshing out individual characters.

Journal feature. Kara no Shojo can be rather complex at times, with tons of names and such being thrown about. As a result, it can sometimes be hard to keep track of what is going on. Fortunately, there is a built-in journal feature, one that automatically collects characters, evidence, and daily logs for the player to reference at any time. On top of that, the journal also has a built-in character relation chart, showing how each character fits into the story. I made heavy use of this journal later on in the game, especially when there were fifty or so names I had to keep track of. It was an incredibly handy feature, one that I wish more mystery visual novels made use of.

Unnecessary H-scenes. I understand that this is an eroge, but it definitely felt like a lot of the H-content was shoehorned into the game. In fact, I would say that Kara no Shojo has some of the most random H-scenes I have ever seen in a visual novel. There were several H-scenes that not only felt misplaced, but completely unnecessary given the serious nature of the story. The most likely scenario here is that the H-content was included just to sell the game, but that comes at the expense of those playing it for the story (the game’s main draw). There were a few H-scenes that felt like they fit, but the vast majority felt as if they were there simply to be there — an afterthought to the game’s story.

Gradual decrease in detective elements. Kara no Shojo is a visual novel with adventure game features, mainly in the form of point-and-click investigation scenes and inference scenes where the game prompts the player to select evidence or people to answer certain questions. These features were great, as they encouraged the player to unravel the mystery themselves, but as the game goes on, it gradually stops offering up these scenes. Instead, the game pretty much solves the mystery for you, taking a lot of fun out of the game’s detective work. Given just how much effort goes into logging every character and piece of evidence in the journal, it was such wasted potential to see it not taken advantage of.

Lack of auto-mode scaling. Kara no Shojo features an auto-mode that does not actually scale with the length of the displayed text. Lines with just single words are displayed on-screen the same amount of time that multiple sentence lines are, making the auto-mode pretty much useless if you are looking to match it to your reading speed. Unfortunately, this is becoming a much more common technical issue with VN releases on Steam, one that I hope will eventually die down. 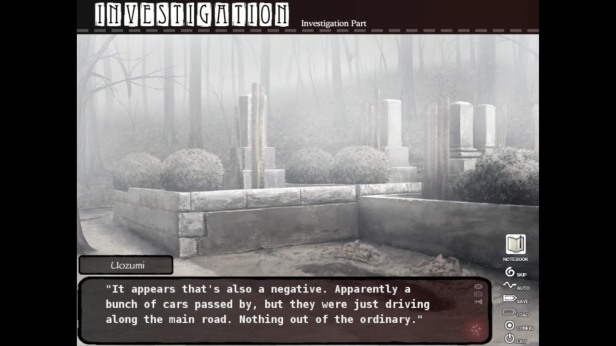 Despite some shortcomings, Kara no Shojo is an excellent mystery visual novel. Not only does the game make excellent use of its setting, but it also manages to tell an engrossing story spread across multiple routes. Even so, the H-scenes definitely felt like they were tacked on and the gradual decrease in detective elements was a bit disappointing to see. Regardless, I still recommend the game, as it is a solid VN all around. Hopefully with Steam’s recent policy changes we can get more VNs like this, maybe even the other two from this series.

You can buy Kara no Shojo on Steam here.