With the floodgates open for 18+ games on Steam, MangaGamer is now able to bring more of its catalog over to the platform, the first of which is Evenicle. This Alice Soft-developed title features a blend of VN and JRPG elements, making for a pretty interesting experience, even if it does not particularly excel in either of those fields.

Good character designs. Right off the bat, it is hard not to notice the quality of the character designs here in Evenicle — they are pretty good. I say hard not to notice because the rest of the game’s graphics (outside of the characters and CGs) are pretty dated, providing for a rather stark contrast between the two. Fortunately, the VN side of the game takes priority, so more time is spent with the good, rather than the bad. For a fantasy game, the colorful designs are very fitting, making the darker scenes in the game that much more impactful. There are a few dull designs, but for the most part, I was pretty impressed. Upon doing further research, I found that the character designer is actually the same one that does the Senran Kagura series, so the character designs being good is pretty much a given.

Decent writing. While the plot is not anything too special, the writing at least makes up for it at times, especially when it comes to comedy. The game’s story is constantly shifting from its more serious moments to its more comedic ones, the latter of which it executes really well. In fact, I would even describe the game’s use of comedy as an outright parody of the traditional isekai fantasy. The protagonist really helps in realizing this, as he remains an incredibly easygoing guy despite the dark nature of the game’s storyline. He effectively doubles as both the game’s hero and comedic relief, being serious at times, but keeping the overall mood of the game light, something perfectly captured through the game’s writing. I would say that the story is well-balanced in that regard, but it does a much better job when it is not taking itself too seriously.

Speedup features. While the JRPG side of the game may be lacking (more on that later), the game at least provides a couple features to make that aspect of the game easier on the player. The first of which is the skip button, a staple feature in any visual novel. However, not only does the skip feature go through text very quickly, but it can also speed up every animation and action in the game, including the game’s combat scenes. This makes such scenes a whole lot more endurable, especially for those that are not really into the game’s combat. On top of that, the game also provides an auto-battle feature and a skill that automatically defeats weaker enemies, providing players with even more options when it comes to the game’s combat. I was incredibly grateful for such features, as it makes the experience much better for those that prefer the game’s visual novel content over its JRPG content. 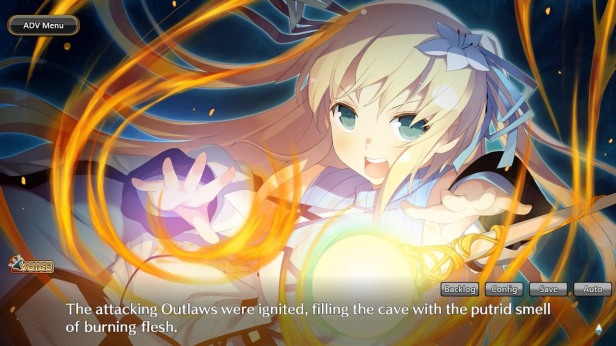 Average JRPG combat. While the visual novel side of the game is not particularly bad, the JRPG side suffers from a painfully average combat system. Granted, the game does not prioritize its JRPG content, but it makes up such a large portion of the game that it cannot be ignored. It does not try to shake up the formula at all and instead provides the most barebones experience, one that felt much more suited for mobile devices over PC. In fact, the inclusion of touch controls made this seem much more likely, even though the game was never released for mobile. The combat is done entirely with the mouse, clicking on enemies to attack and sometimes clicking elsewhere to use abilities. I was able to breeze through many of these battles simply by using the game’s auto-battle feature, but there were some bosses that required a bit more effort. Overall though, it is not too exciting as far as JRPG combat is concerned, but the game at least provides tools to speed up the process.

Inconsistent story quality. I may have praised the game’s writing, but its overall story definitely had some issues. There were a couple segments in the story that just felt dull compared to the rest, usually because they prioritized telling a serious story instead of just banking on the game’s more lighthearted elements. For a game with such a generic plot setup, this simply does not work well, as the clichés just become tiresome. I have no problem with the game having serious content, but it really needs to space it out appropriately, so as to avoid having entire half-chapters drag on (such as the first half of chapter 2). Again, this is an eroge, so it may not even matter for many, but for being such a long visual novel, the inconsistent quality of the storyline was a bit disappointing to see.

Limited keyboard support. Yet again we have another 2018 game release that does not allow rebindable keyboard controls. Normally, this would not be a problem for a visual novel, but considering that Evenicle is half JRPG, it really proved to be quite troublesome. For example, I made constant use of the game’s skip button when traveling around and doing battle. However, the keybind for skip was control, a key that becomes really uncomfortable to hold down for long periods of time. In fact, I actually took breaks while playing due to this discomfort. For this specific issue, the ability to toggle the game’s speedup feature would be very helpful, but it could also be solved by simply allowing configurable keybinds, something that should be expected of any new PC game release.

However, it is not just the lack of rebindable controls that I have a problem with. I was also not the biggest fan of how limited the keyboard controls actually were in the first place. The game allows the player to move about using the standard WASD or arrow keys, but does not carry this over into combat. In combat, one has to actually use the mouse or touch controls in order to get anywhere, despite the fact that the player may have just been using the keyboard to control the game. From my testing, I found that the only keyboard control used in combat was ‘a’, which is used to toggle auto-battle. Having to constantly switch between the two control methods was a bit annoying, something that can easily be solved by simply adding basic keyboard controls to the game’s combat. 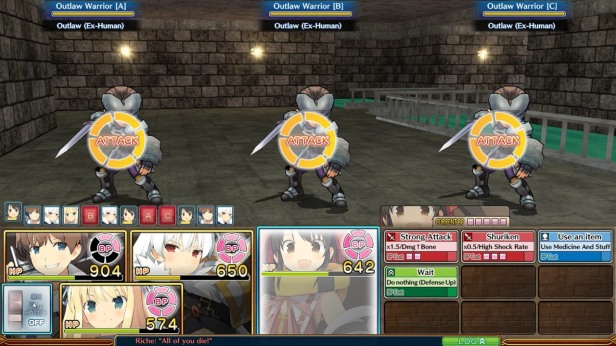 For a VN-JRPG hybrid, Evenicle is a pretty average experience. The plot is generic, the combat is nothing special, and the game even has some control issues. However, it does have some nice character designs, some decent writing, and some handy speedup features to make the combat a bit more endurable. Granted, this is an eroge and many will likely not play the game for those elements, so for that crowd, this would definitely be a decent recommendation. Those looking for an eroge with a decent story will likely still have a good time with the game, but there are definitely better options. I would give the game a light recommendation overall.

You can buy Evenicle on Steam here.