After a brief delay, Disgaea 5 Complete finally makes its way to PC. Fortunately the delay was well worth it, as the port is really well-optimized, allowing the game’s fun and complex tactical gameplay and endless customization options the chance to shine. The story, on the other hand, is a bit lackluster and the forced grinding is definitely questionable too.

Fun and complex tactical gameplay. On the surface, Disgaea 5 does not appear to be a complex game, especially given its more comical anime aesthetic. However, the gameplay here is actually rather complex, or at least as complex as the player wants it to be. There are a number of different mechanics that make this so, such as throwing, combos, revenge mode, squad attacks, etc. All of these make for some pretty fun combat, however, each level can just as easily be cleared by queuing up attacks and executing them, disregarding all of these mechanics. Granted, one will want to have a high-level character in order to do so, but at least the game gives that option. If one does take advantage of these other mechanics, certain enemies will be much easier to defeat and levels can be cleared quicker. It also helps in that more rewards are earned through the game’s bonus gauge at the end of each level, with more combos leading to better rewards. The gameplay really strikes a nice balance there when it comes to complexity.

Seemingly endless customization. Disgaea 5 is perhaps the most customizable JRPG I have ever played. The game has an almost infinite amount of possibilities when it comes to customization. Be it character class, subclass, weapon type, evility, or item innocents, there is simply so much customization here that I was completely overwhelmed at the start. Even after clearing the main story, I was still unlocking new classes and gaining access to new weapons – there seemed to be no end to it. This opens up a world of possible play styles, whether you prefer taking out enemies with ranged attacks using a gunner or archer, magic attacks using a mage or sorcerer, or getting right up in the enemy’s face with a wrestler or dark knight, the game has pretty much everything covered. With so many possible combinations, there should be something for everyone.

Excellent polish. NIS America may not have the best reputation when it comes to polished PC releases, especially after the disappointment that was the Ys VIII launch. However, here with Disgaea 5, I ran into no such issues. The game is incredibly well-polished, both in terms of optimization and being bug-free. I had no stuttering, no crashes, no freezes, absolutely nothing that seems to plague the publisher’s other PC ports. It looks like the delay was well worth it, as the result is a pretty well-polished PC port.

Boring storyline. Going into the game, I did not expect a good story, so fortunately, I was not surprised when the story here ended up being a drag. It is just about as generic as you can get with a JRPG, except this time with a whole lot more comedy. The comedy element is not even that bad, it is just that the story itself is so boring that I honestly ended up outright skipping several scenes over the course of the game. It certainly does not help that the story is forced onto the player, with a story segment taking place before and after each level in the game and several times outside of these levels. If the story element was toned down a bit, it may not have been as much of a bother, but with so much emphasis placed on it, it is kind of hard to ignore its mediocrity. At least the English voice acting was decent, but not enough for me to end up caring for any of the game’s characters.

Difficult learning curve. If I were to describe the learning curve in Disgaea 5 on a graph, it would start out with a steep incline, then continue into a relatively straight line. At least, that is how I would describe my experience with the game, having never played a Disgaea game before. During the first few levels, the game basically dumps a mountain of information on the player, enough to be easily overwhelmed. It took me several chapters to finally get the hang of the game’s combat, after constantly referring back to these tutorials and trying to figure out what I was doing. It also does not help that the game gives the player access to so many NPCs at the start of the game, without explaining any of them. I spent a great deal of time just going through each NPC and figuring out how I was supposed to use them, learning key gameplay mechanics along the way (such as evilities and item innocents). While the learning curve does become progressively easier, I really wish that the game had spent more time easing the player into things, so as to make it easier for newcomers like myself.

Forced grinding. Grinding is something I am not particularly fond of when playing JRPGs, so I was rather disappointed to see how important it was here in Disgaea 5. Not only is grinding encouraged, but it is actually forced on the player. The characters simply do not level fast enough compared to the enemies, so at some point, the player will have to grind in order to get caught up in level. I did not do a lot of grinding early on, so the enemies eventually reached the point where they out-leveled me by over ten levels, a pretty large margin for that point in the game. I ended up having to grind in the item world until my characters were equally matched. And speaking of item world, the game actually requires the player to go through it in order to progress the game. There is one point in the story where a key needs to be leveled in the item world in order to unlock the next few levels. Granted, this is the game’s way of introducing the item world, but having to grind in it is just tedious and something I would prefer to avoid.

Even the game’s quests require some form of grinding, with several taking the form of “play this class until it reaches this level”, oftentimes to unlock a new class. Normally, this pattern would make sense, but given that the fastest way to complete these quests is to simply grind them out in the item world, it simply becomes more of a chore to complete than anything.

Cursor issues on some maps. Disgaea 5 has this really annoying issue with the cursor on certain maps. Whenever a map has a narrow bridge or some sort of elevated path, moving the cursor off of that path brings the camera all the way down to the bottom of the level, away from where the player was just looking. This was especially annoying on maps that consisted entirely of 1-tile wide bridges. On these maps, I would be moving my party about on these bridges, only for the game to constantly shift my camera downwards because I accidentally moved my cursor off of the bridge. It was annoying to constantly have to readjust my camera so that I could actually see my party on such levels. Fortunately, the game offers a top-down view which eliminates this problem, but I liked using the default quarter view. If there were some sort of sticking feature (like making the cursor locked to a certain elevation until a button is pressed), then this would not be a problem, but unfortunately, no such feature exists. 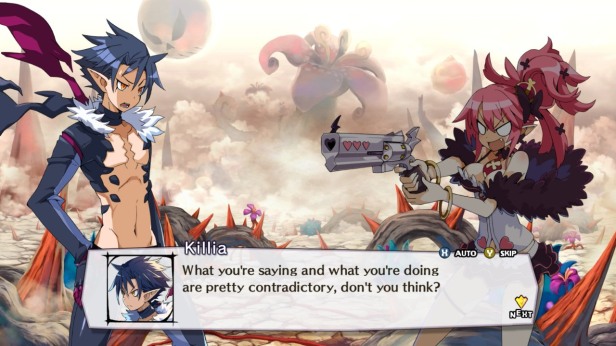 Despite some flaws, Disgaea 5 Complete is a solid JRPG. The port is really well-optimized, the customization options are endless, and the gameplay itself is pretty fun too. It is a shame that the story could not match the quality of the gameplay, but at least that part can be skipped. However, the forced grinding is a bit of a let-down and the difficult learning curve does not help either. Even so, I do recommend the game, as it kept me entertained for hours on end, something that I rarely see with tactics games these days.

You can buy Disgaea 5 Complete on Steam here.

Review was edited on 2018-10-23 to change the use of the term “well-done port” to “well-optimized port” to better reflect what I was talking about.