It took 32 years, but a mainline Dragon Quest game has finally arrived on PC in the West. Dragon Quest XI brings with it a fully-voiced English localization, a wealth of content to explore, and some of the best character designs I have ever seen in a JRPG. However, the game is lacking in the music and quality of life departments.

Fun combat. When it comes to combat, Dragon Quest XI plays it very safe. The game does not do much to shake up the traditional turn-based combat system, and it does not really need to either. Many recent JRPGs feel overloaded with features to make their combat more interesting when, in reality, it just makes it that much more clunky. Dragon Quest XI shows that you do not need super-complex combat to make an interesting game. The combat here has all of the options one would expect from a traditional turn-based combat system, including attack, spell, ability, equipment, items, tactics, etc. It is simple enough for new players to get into, but provides just enough complexity to remain interesting for veterans of the genre.

Wealth of content. The Dragon Quest series is known for its length and Dragon Quest XI is no exception. The game not only has a really long main storyline, but a game world packed full of stuff to do, including dungeons to explore, quests to complete, and treasure to find. One could easily dump a hundred or so hours into the game just to see everything it has to offer. However, even while going through just the main storyline, it never felt like it dragged on too long. Everything the player did felt like it had purpose and developed the story in a meaningful way. It was not like the player is just plopped down into a massive dungeon and forced to work through it before the story progressed. Rather, the player is rewarded throughout the experience with constant story development all the way up to the first ending and even past that. In fact, there were so many cutscenes in the game that I probably spent a few hours just going through those alone. While the story may not be anything too special, it is definitely well-polished and provides for countless hours of fun on top of everything else the game already offers.

Character and enemy designs. Dragon Quest XI has, by far, my favorite character and enemy designs in any JRPG I have ever played. Just entering new areas and seeing all of the new enemy designs was easily one of the most enjoyable aspects of the game. While the game may have some serious story segments, the overall tone is rather casual (or even outright goofy at times), something perfectly depicted through the game’s character designs. However, even with these designs, the game strikes a nice balance with its goofiness and the story segments do not feel any less impactful as a result. The mastermind behind these designs, Akira Toriyama, definitely knows what he is doing. He is the man that created Dr. Slump and Dragon Ball after all.

Full English voiceover. One change the English version of Dragon Quest XI made from the Japanese version was the inclusion of full voice acting. As someone who normally plays with Japanese voice acting, I was pleasantly surprised with the quality of the voice acting done here. The voices add quite a bit of personality to the characters, with no voice feeling out of place. This, in turn, allows for a more immersive story experience. If one wants an experience more akin to the Japanese original, the option to disable the voice acting is there in the settings, but I definitely recommend keeping the voices enabled — they really did a nice job there.

Party levels at the same rate. One of my favorite quality of life features in a JRPG is having the entire party level at the same rate. That is, every member of the party earning experience from battles regardless of whether or not he/she actually participated in said battle. As such, I was excited to see the feature included here in Dragon Quest XI. This makes the game a lot less grindy and allows for the story to take center stage. It was nice to work my way through the game without worrying about the levels of my party members, something I often I have to do with other JRPGs. 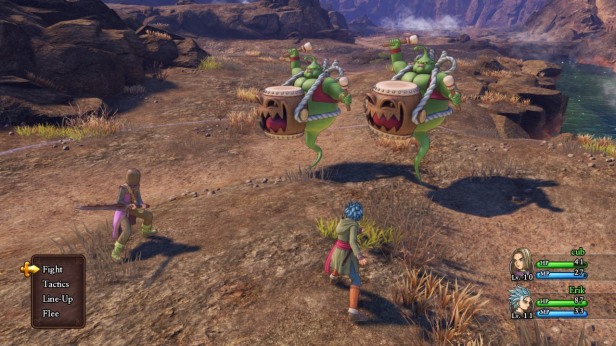 Subpar soundtrack. Being a Dragon Quest game, I expected a pretty stellar soundtrack. However, those expectations were just met with disappointment here in Dragon Quest XI. The music just feels so uninspired and does not match the quality of the rest of the game. There is also a general lack of diversity with this soundtrack. I would constantly hear the same themes over and over, enough so that I grew tired of them pretty early on. The game really just needs a more diverse, orchestral soundtrack to match its modern look.

No battle speedup or animation skipping. For a JRPG released in 2018, I had expected at least some form of battle speedup or animation skipping feature. Unfortunately, Dragon Quest XI does not have either, instead forcing the player to sit through battles that oftentimes just feel too slow. In fact, I would say that the lack of such features artificially inflate the playtime of the game. If such features were included, I could have probably shaved an entire four or five hours off of my total playtime. The game at least allows pep attack animations to be skipped, but that time saved is trivial compared to what could have been saved from being able to skip regular attack animations. As for auto-battling, the game does provide something pretty close. Setting all party members to “fight wisely” puts them all on auto-pilot, but it does not make the battles any faster. Fortunately, the game does not require much grinding, but the option to make these battles faster should still be present regardless.

Unskippable cutscenes. This is a game that makes heavy use of cutscenes to tell its story, so the fact that these cutscenes cannot be skipped is going to be a bit problematic for some. The game at least allows most boss cutscenes to be skipped if they have been viewed once, but there are still a few bosses where this is not the case. There is also no auto-mode, so every piece of dialogue needs to be confirmed by the player before advancing to the next. I felt little need to skip the game’s cutscenes, but the option should still be there for those that do. It is a basic quality of life feature that should be expected of any new game. 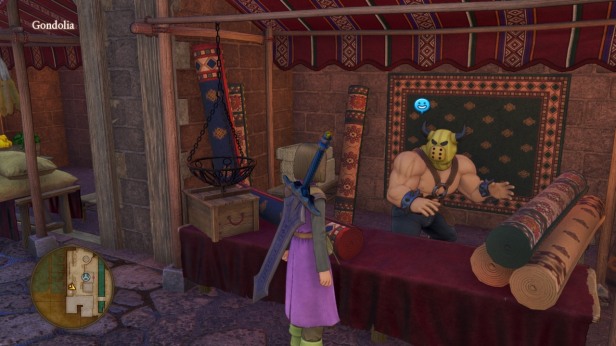 Dragon Quest XI may have some flaws, but it is definitely a solid JRPG experience. The combat is solid, the content is vast, the character designs are fantastic, and the addition of an English voiceover is also a plus. It is easily one of the best games to have come out this year and definitely earns my recommendation.

You can buy DRAGON QUEST XI: Echoes of an Elusive Age on Steam here.