This visual novel is a rather odd release. On one hand, it is a VN about hackers and the world they live in, a concept rarely touched on in VNs. On the other, it is a freeware title that is still available to download on the developer’s website, although without the English translation. The game may have some good art, but it definitely shows signs of being a freeware title, and not in a good way.

Good character designs. If there is one thing CyberRebeat does really well, it would definitely be the character designs. These designs take a more “artistic” approach compared to what appears in many Japanese VNs today. Sure, the designs may look rough, but it actually matches the overall theme of the story. This is a story about the darker side of hacking after all. The art actually reminded me of what I would see in a manga, and definitely not in a bad way. It was a nice change of pace compared to the tried-and-true art I usually see in the genre.

Language-switching feature. CyberRebeat may be lacking in features (more on that later), but it does one-up other VNs by having a language-switching feature. This allows the player to toggle between Japanese and English in the menu or anytime during play. It is an incredibly handy feature to have for those learning either language. I am currently learning Japanese, so it was nice to see how the translation compared. I have only played a few VNs that actually have this feature, so CyberRebeat has done well in that regard.

Barebones settings menu. CyberRebeat has one of the most barebones settings menu I have ever seen in a visual novel. The options consist of text speed, audio volume, window opacity, and language, that is it. While these are good options to have in a VN, the complete lack of other basic VN features is a bit troublesome. There is no control customization, no display settings, no font settings, and no auto-mode speed option. These are just basic settings one should expect in every visual novel, so it is a bit unfortunate that several are lacking here. The game at least gets some credit for the on the fly language-switching, but it definitely needs some more work done elsewhere.

Lack of keyboard controls. As if the barebones settings menu was not enough, the game also lacks when it comes to keyboard controls. I usually play visual novels by advancing the text with either space or enter, but neither of those options worked here. In fact, the only way to advance the text was through left-clicking. This is the first time I have encountered a visual novel that behaved this way and it bothered me so much that I ended up configuring an AutoHotkey script to simulate left-clicks with space and enter. What is strange is that the game allows message skipping and auto-mode toggle through keyboard controls, so it is honestly baffling to me that text advancement was not given the same treatment. The AutoHotkey script did allow me to play through the game without much of an issue, but this should not have been an issue to begin with.

Text issues. The game does have a few issues outside of its settings menu, mainly with grammar and textbox overflow. The former was not nearly as bad as many bigger visual novel releases, as it was usually just a misplaced comma or two, but it should still be noted. The textbox overflow issue is much more apparent, with several scenes filling up the entire box with text, sometimes even spilling out of it. Most of these lines could have easily been split, which would not only solve the overflow issue, but would also make the reading pace a bit more steady. 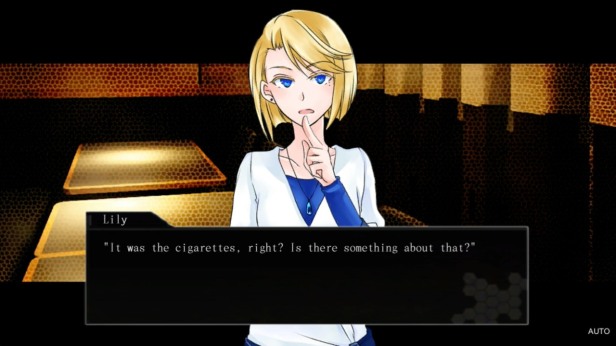 For a visual novel, the story is rather average, but the game does have some nice art to go along with it. What really makes it a hard sell though is the lack of settings, some of which are essential for every VN. A VN that does not allow the player to advance the text using a keyboard is definitely an oddity. On top of that, the game does have some grammar and textbox overflow issues. As such, I would not recommend the game unless if you are really into the subject matter and are able to bear with the numerous technical issues to get through it.

You can buy CyberRebeat -The Fifth Domain of Warfare- on Steam here.