It is time for another ACTUAL Game Impressions post! Again, these are games that are either unfinished (such as games in Steam’s Early Access program) or that I simply did not want to cover for my ACTUAL Review series.

This game is quite the departure from the usual Compile Heart game. While it may share many similarities with previous Compile Heart games (such as art, characters, and music) there is one glaring difference: the genre is that of a tile-based dungeon crawler. I quite like this new trend of localizations that are not just their tried-and-true turn-based JRPG formula. We saw a little bit of this with their last localized title, Sorcery Saga: Curse of the Great Curry God, which played like a Mystery Dungeon game. With Mary Skelter though, they have basically taken what makes their JRPG formula tick and applied it to a dungeon crawler format. The end result is actually pretty good.

For a dungeon crawler, the gameplay is pretty solid. Movement is done on a grid, just like the older Megami Tensei titles, and although this movement is done in real-time, battles with enemies are done using turn-based combat. The enemies are also limited to random encounters on the map, which is a bit of a shame, but it was not too annoying. There are also bosses in each dungeon that, when encountered, will chase down the player through the dungeon in real-time, moving along the grid just like a player would. These sequences were pretty fun, even if I ended up dying to the boss 90% of the time. I played on normal difficulty too, so this definitely is not the easiest Compile Heart game to get into in terms of difficulty.

It is also worth mentioning that Mary Skelter has an incredibly handy auto-move feature, allowing the player to select a spot on the map and be automatically moved there. I do not think I have ever played a tile-based dungeon crawler that had this feature and it saved me quite a lot of time when exploring, even if random encounters still happen along the way.

As for the game’s aesthetic, the graphics are fine, or rather, they are what one would expect coming from a Vita port: nothing too spectacular, but good enough. The music, on the other hand, is easily some of the worst I have heard in a Compile Heart game. It is such a jarring mix of styles that I really do not know what the composers were going for. Most of it fits the game’s dark atmosphere, but there are a number of tracks that just feel out of place. It is not a terrible soundtrack, but definitely the worst I have heard from a Compile Heart game.

Mary Skelter is a rather easy recommendation. The gameplay is pretty solid for a dungeon crawler, the aesthetic is not that bad, and the porting job done by Ghostlight is excellent. As with most games in the genre, it will definitely take some time to beat though. I am only 6 or so hours into the game and still have a long path ahead of me.

If you have ever wanted a Smash Bros. game on PC, look no further than Slap City. I started playing this with a group of friends and before I knew it, several hours had already passed. It is just that fun. The Mechanics are polished, the characters are fun, and the stage variety is pretty good, especially considering that the game is still in Early Access.

When it comes to the mechanics, the game obviously draws inspiration from the Smash Bros. series. The whole move system is setup in such a way so as to allow seasoned Smash players like myself an easy transition into the game. For example, characters have up specials, forward tilts, are able to tech hits, and can even wave dash. I felt right at home and was able to pick up each character I played with ease. That is not to say that each character is easy to master though, as there are a number of combos and such to learn with each character.

As for the characters, the variety may be lacking as it is, but at least the ones available are a blast to play. My favorite ended up being Fishbunjin: some sort of fish/platypus hybrid with huge, bulking muscles. Each character has their own unique move sets that emphasize their strengths, such as Fishbunjin’s emphasis on heavy hits due to his super armor or Business Casual Man’s money system.

Perhaps the game’s most surprising feature is its map variety. For being an Early Access title, 17 stages is definitely a pretty nice amount, a number I would have expected from the finished project. The developers are aiming for 25 stages though, which is definitely a lot for a game of this scale, especially considering that Super Smash Bros. Melee had a total of 29 stages. The stages accommodate for both the competitive and casual crowds, including both standard, barebones stages and the more crazy ones (such as the pinball stage).

Even though the game may be an Early Access title, it definitely earns my recommendation. Slap City is one of the better fighting games on Steam, and easily serves as the best Smash Bros. alternative available on the platform. The characters, stages, and mechanics are relatively polished and are only going to improve as the game gets updated prior to release.

Here we have another localized doujin game courtesy of Fruitbat Factory – and a rather disappointing one at that. Dungeon Girl is a puzzle RPG that is clearly better suited for mobile devices than it is for PC. This is evident in both its graphical settings and lack of depth in its gameplay.

When first starting the game, the player is just thrown right into it, with no actual tutorial to show how things are done. The game does include a number of info cards that explain its mechanics, but these info cards are really just giant walls of text and do not really help in settling in newcomers. Even though I read all of these cards, I was still very confused with some aspects of the game (mostly the item crafting and skill system). It also does not help that the game’s UI is pretty subpar and can be difficult to navigate at times. The screen is just way too cluttered, especially for a game running at this resolution (more on that later). If the game actually cut down on some of this clutter and had a decent tutorial it might actually be accessible to newcomers without hours of trial and error.

The gameplay itself is passable: nothing too special, but not bad. It takes the form of a match 3 game, with fighting, exploring, healing, and mining all being done through a match 3 interface. It is also not an easy game, as enemies get increasingly more difficult to beat, forcing the player to constantly go back home and come back with better equipment and items. However, it really just boils down to a formula: enter the dungeon, click on tiles repeatedly, exit to get better equipment, and repeat. The match 3 element of the game does not even require strategy, mindless clicking can get some pretty good results as well, especially when exploring floors that have already been cleared. The gameplay follows this formula for 1000 floors, so there is definitely no shortage of content to go through, it is just a shame that such content is rather shallow.

As for the graphical side of things, Dungeon Girl definitely suffers in that department. The game only allows its volume settings to be changed, with no options for resolution, window size, etc. In fact, the game is locked to an incredibly small resolution, coming in at just 960×600. This is just slightly taller than the resolution used by the PlayStation Vita and it really is just disappointing to see such a resolution being used on PC.

I cannot recommend Dungeon Girl, it is just too shallow a game and feels like it belongs on mobile rather than PC. It completely lacks any sort of graphical settings, is locked at an incredibly low resolution, and the gameplay just gets boring way too quickly. At least the art was decent, but not enough to save this one. 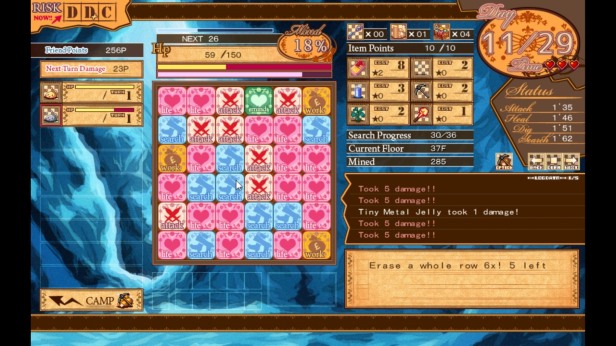 I was provided free review copies of the games featured here. Read more about how I do my game reviews/impressions here.