It has been just three months since Steam saw its last Ys release, one plagued with technical issues upon launch at the hands of NIS America. Fortunately, the port here for Memories of Celceta is handled by XSEED, who have done an excellent job porting the title over.

Fast-paced gameplay. The Ys series continues to be my go-to recommendation for those that want a fun JRPG experience without the turn-based combat or relatively slow nature that dominates the genre. Memories of Celceta picks up the pace early on and does not stop from there, immediately throwing the player into a world full of colorful environments, likable characters, and cool boss fights. As for the enemies scattered throughout this world, there seemed to be no end to their diversity. Even towards the very end of the game I was still being presented with new enemies, each with their own unique design and move set. The story maintained this quick pace as well, with dialogue scenes that never really dragged out the experience. This pacing was kept up until the very end and left me feeling very satisfied with the experience.

Fun combat. The skills and type-matchups make the combat immensely more interesting – something more than just a hack and slash fiesta. Certain characters do more damage depending on enemy types and certain skills even allow for different playstyles. For example, I made heavy use of a dashing attack on my main character, which, when combined with the ice stats on my weapon, made for some pretty strategic combat. I would dash into a group of enemies, freezing many of them in the process, get a few hits in before they thawed, then back out to avoid unnecessary damage. This of course is made possible through the game’s incredibly responsive dodging. All it takes is one tap of the dodge button and my character goes rolling in whatever direction I choose. In fact, I traveled the game world by constantly dodge rolling because it was just that fast. All of these elements combined make for some pretty fun combat.

Great soundtrack. Yet again I am here playing another Ys game with another stellar soundtrack. The soundtrack for Memories of Celceta is full of all of the traditional JRPG tracks one would expect, but done so in a masterful way by Falcom Sound Team jdk. There are lively town themes, ominous dungeon tracks, and, of course, action-packed battle themes. The soundtrack may not be the best in the series, but Falcom Sound Team jdk has yet to produce a disappointment and the soundtrack here is no exception. My favorite track ended up being To the Stage of a New Era.

Well-done port. The last Ys game to release on Steam, Ys VIII, had a number of technical issues upon launch at the hands of publisher NIS America. Fortunately, XSEED has done quite the opposite here with Memories of Celceta. The game runs super-smooth at 1080p 60fps and, despite the fact that I played through the entire game before launch, I only ran into a single technical issue (which I will discuss later). On top of that, the porting team went above and beyond with the game’s settings menu. It comes in the form of a launcher that explains what each and every setting does and even includes pictures that note the differences between each setting. That same launcher also allows the game’s auto-save feature to be configured, a feature that is completely independent from the saves featured in-game, as a sort of emergency backup system. This is a godsend for JRPGs, as losing progress due to a power outage is one of the worst feelings ever. And speaking of godsends, the launcher also has an option to toggle the game’s startup logos, allowing players to jump right back into the game without having to view the five or so splashes beforehand. The port is just really well-done overall and I only hope that more ports follow the example set here by XSEED. 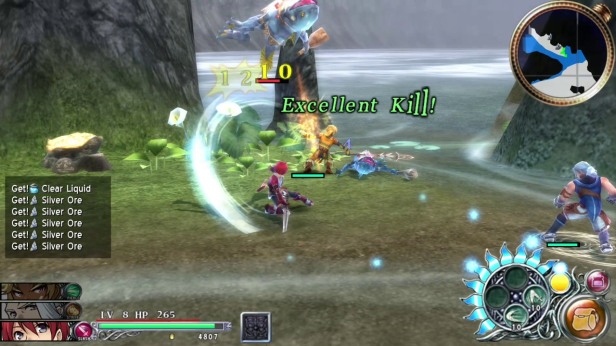 Wonky camera. The camera for Memories of Celceta can be a bit troublesome at times. The only control the player has over it is a basic zoom in and out function, the rest being handled by the game. Normally, the game is pretty good at figuring out the right camera angle, but there were several points during my playthrough that had me wishing for a completely player-controlled camera, especially during the swimming segments. The camera at least does a bare minimum job, but it would be so much better if it could be configured further.

Some game freezes. The only technical issue I ran into during my playthrough would be that of some minor game freezes. The first time I ran into this issue I had feared a game crash, but fortunately it turned out to just be a series of short freezes. When these freezes occurred, the game would lock itself up for a second or two, then resume, then freeze for another second or so, then resume and repeat the process a couple more times. Although this issue only happened to me maybe six or seven times, it is still a technical issue nonetheless.

On top of the fun and fast-paced gameplay already present in the original game, the port here is very well-done, including a variety of options to really make the game shine on PC. Even so, the camera can be a bit troublesome at times and the port is not “perfect”, but it is definitely enough to warrant a recommendation, even for those that have never played an Ys game before.

You can buy Ys: Memories of Celceta on Steam here.

One thought on “Ys: Memories of Celceta (ACTUAL Game Review)”