Die for Valhalla! is basically a dumbed down Castle Crashers clone. It does have an interesting gameplay gimmick, but the level design is boring and the combat is just downright repetitive.

Cool gameplay gimmick. The whole gimmick setting this game apart from similar titles (such as the inevitable comparison to Castle Crashers) is that each player controls a Valkyrie, a fancy term for a ghost that has the ability to take control of the dead. These Valkyries can fly around and take control of a variety of fallen viking warriors via their gravestones. The interesting bit is that there are different viking classes, each with a different appearance and wielding different weapons. These vikings can then be scarified to Valhalla at any time to swap for another fallen warrior. The mechanic itself is really cool, allowing each player to swap to and from the different classes whenever he/she feels the need to. I played in a group of three and we all had fun experimenting with the different classes and trying to find our fit.

Two methods of play. Die for Valhalla! can be played one of two ways, either beat ’em up style (like Castle Crashers) or roguelite style. The former is played on a larger world and does not feature permadeath, whereas the opposite is true with the roguelite mode, being set in a smaller world, with a steeper difficulty curve and permadeath. As such, Die for Valhalla! can accommodate both those looking for a more casual experience and those looking for a challenge. 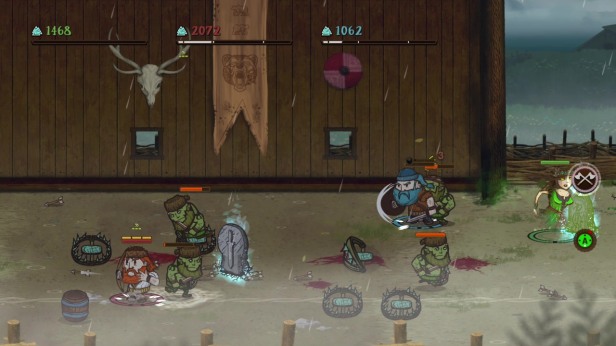 Very repetitive combat. Despite the cool gameplay gimmick, it is completely wasted due to just how boring and repetitive the combat is. The game does introduce a wide variety of enemies, but every single enemy, outside of a few exceptions, can be defeated in the exact same way. Most of my time was spent playing as a viking that dual-wielded axes and every combat situation I found myself in just boiled down to spamming my attack, backing up to avoid enemy attacks, and repeating until the enemy was dead. It was the same for my buddies to, one of which just stood in the back with a bow and spammed arrows the whole time, without much consequence. The only enemies to break this pattern were those with shields, requiring the players to attack said enemy from behind or hit the shield with a charged attack, breaking it in the process. The bosses are also an exception, as they actually have attacks that are worth dodging (considering the damage they do). Overall though, the combat is just far too flat and we grew bored of it within just the first hour.

Boring level design. To go along with the repetitive nature of the game’s combat, the level design is equally repetitive, even though it is procedurally generated. Each level has the players slowly advancing right, fighting wave after wave of enemies, until they reach the end. That is fine on its own, as that is just the genre, but the way Die for Valhalla! approaches it is just lazy. Each level ends in the same way, with the players being tasked with defending a shrine for a certain amount of time, defeating a boss, or just living through a timed endless wave of enemies. On top of that, there is little variety in each level’s environment, with backgrounds, obstacles, and enemy types changing very little over the course of the game. So not only are players stuck going through repetitive combat, but they are doing so on levels that just feel static.

Freezing. Unfortunately, our first play session was cut short by a game freeze that required the game to be force-closed, losing some level progress in the process. We even gave the game some time to unfreeze, but it did not do so after several minutes. The timing was quite unlucky, as we were close to the end of that run. It only happened once, but is still worth mentioning regardless. 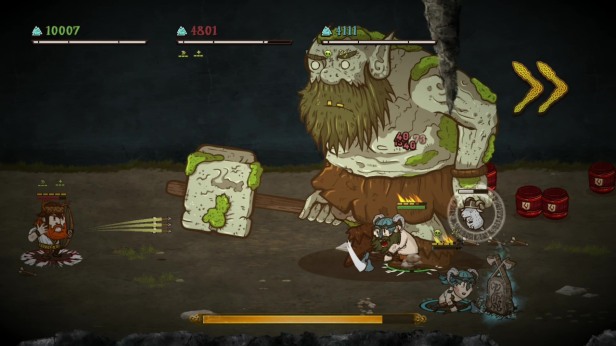 All of the elements for a good beat ’em up are definitely there, Die for Valhalla! just does not use them properly. The combat is made to be repetitive and the level design is just lazy at times. Not even the cool gameplay gimmick could save it. I would honestly just recommend replaying Castle Crashers unless if you are absolutely starving for something similar.

You can buy Die for Valhalla! on Steam here.