Assault Gunners is a third-person mecha shooter that was previously only available in Japan and exclusive to the Vita. The HD edition is a port of that game, and a very lackluster one at that.

Upgrade and customization system. My favorite feature would have to be the mech customization and upgrade system. There are plenty of different parts to choose from, allowing customization of the mech’s body, legs, three different weapon slots, fists, and other various attachments (that can number in the double digits). The color scheme can also be changed, but only from the presets offered. The game also provides features to easily copy mechs between the different slots within the player’s squad, making it much easier to sync the attachments and such across the entire squad. There is no shortage of unlocks either, so there is always new parts to try out and upgrade using the game’s currency.

Repetitive gameplay. Sure, the game may have plenty of levels to choose from, but when the entire game just keeps repeating the same objectives over and over, it gets quite tiring. Every single level has the player either eliminating all of the enemies, capturing some objectives, or taking down a more powerful enemy. These objectives were copied and then pasted onto different environments in an attempt to make each level feel fresh, but it simply just does not work. The levels barely take five minutes to complete each, so it is not even that long before the pattern becomes apparent. The game may have been more enjoyable in this regard had a wider variety of mission types been made available – it just grows stale way too fast.

Bizarre controls. Assault Gunners HD has probably the most bizarre control setup I have ever been subjected to. For example, cycling between the four weapons, by default, is bound to 2, 3, C, and F. I fail to understand how that makes any sense. The game at least allows these controls to be rebound (so I ended up binding the weapons to 1, 2, 3, and 4), but why make it a necessity to do so? Who would want to press X to open the menu? Why would that not be bound to ESC (which does nothing by default)? It just makes no sense. On top of that the game does not allow the mouse sensitivity to be changed, so I was stuck on a rather high sensitivity my entire playthrough.

Clunky UI.  Graphic-wise, the port did not even do that bad a job. The graphics are certainly not good, but at least passable. What the port failed to do was adjust the scale of the UI elements. As it stands, the UI takes up a very large section of the screen, much more so than necessary. For a Vita game, it makes sense, but on PC the different UI elements just do not need to be that big. The weapon selection element alone takes up just about the entire bottom-right side of the screen. Allied mechs take up a massive section of the upper-left of the screen as well. Just about every UI element could and should be much smaller. Somewhere around half their current size would just about do it. 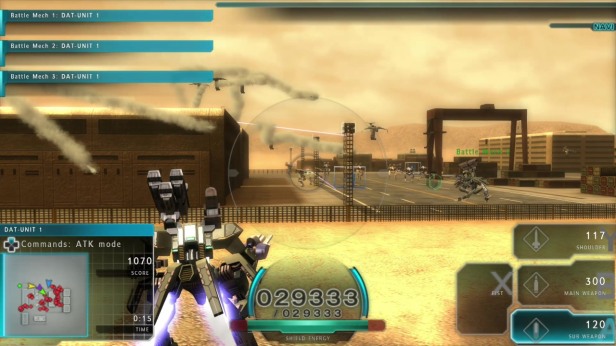 The customization and upgrade system is pretty cool, but it does not make up for the frustratingly repetitive gameplay. The port itself is not all that great either, having several control and UI issues that should have been fixed prior to release. Even though the genre may be lacking on Steam, Assault Gunners HD is simply not worth the trouble.

You can buy Assault Gunners HD Edition on Steam here.