Candleman is a nice little indie game with a brilliant concept: given only 10 seconds of light per level, can the player guide the little candle to the end? The game is more an atmospheric experience than anything, as it is not challenging, but that is not a bad thing either.

Excellent sound design. Candleman does not actually have traditional background music, instead relying on an ambient soundtrack to fill the void of silence. This works in favor of the game, as it places emphasis on the game’s sound design. This emphasis being well-deserved, as Candleman has some really nicely done sound design. The many different sound effects mesh with the ambience in such a way as to make the game a calming experience. Sometimes the only sound the player hears is the footsteps of the little candle, but even that is enough to evoke that feeling.

Relaxing gameplay. This is definitely not a game for those looking for a challenge. Most levels can easily be cleared on the first try, with only a couple of the later levels giving me any sort of trouble. Even then though, I was able to clear those levels without getting a game over as the game is very generous with the amount of lives it gives (10 per level). Several mechanics are introduced throughout the course of the game, but none of them are too difficult to pick up. Combining this style of gameplay with the sound design really makes the game a relaxing journey. 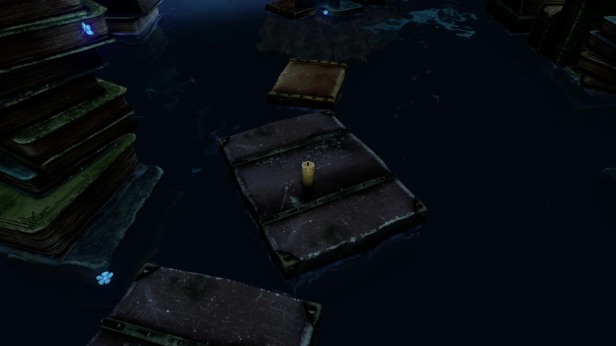 Lazy side-objectives. Each level in Candleman has a specific amount of candles to find, anywhere from 3 all the way up to 11. It is not necessary for the player to find all of these candles, as the player’s only goal is to reach the end of each level. Only those looking for 100% completion will need to seek out all of these candles and light them. However, it is not difficult at all to find these candles. Sure, the game is not really a difficult game regardless, but the majority of these candles are so lazily placed that I did not even bother grabbing a lot of them simply because it would just be a waste of time. I would oftentimes see one of these candles across some gap and decide that it was not worth the effort to reach it, as there is no reward outside of some poetry at the end of the level (which is only unlocked if all candles are lit in that level). I wish that more effort went into hiding these candles in creative, yet not painful-to-reach locations, rather than just creating a second path and placing a candle at the end of it. Maybe then I would feel a sense of accomplishment from lighting them all.

Typos. As I have stated in previous reviews, small amounts of typos do not really bother me, so this is a rather minor complaint. However, it is still worth noting that Candleman’s localization does have a few typos, both in the subtitles for the narration and the poetry seen at the end of each level.

Although it only takes about four hours to complete, Candleman is definitely an enjoyable experience. The sound design and relaxing gameplay are easily the game’s greatest strengths. Even so, there are some lazy side-objectives tacked onto each level, but they can easily be skipped so as to not be detrimental to the experience. If you are looking for a short, relaxing 3D platformer, Candleman is a great choice.

You can buy Candleman: The Complete Journey on Steam here.