The girls of the Neptunia series are back again, this time to play an MMO. Cyberdimension Neptunia: 4 Goddesses Online is technically playing a game within a game as a result. Do note that this is a review of the singleplayer experience as I had no friends to play the multiplayer with.

Great customization. Cyberdimension Neptunia has a more complex customization system compared to other JRPGs. Not only can the player equip different clothing, hair, and weapons, but the player can also equip a variety of accessories. However, these accessories can be further customized to the player’s liking. The game allows accessories to be placed anywhere on the character, giving the player full control of the X, Y, and Z position of the accessory, its rotation, size, etc. The game also allows these accessories to be animated. Halfway through my playthrough, I equipped Neptune with a rotating 10-gallon hat. I played through the rest of the game with that rotating 10-gallon hat, it was glorious.

Party system. There is a “tactics” menu that allows the player to choose how the bots on his/her team behave. Being able to manage how the party approaches a battle is a great feature for this type of game, especially because the bots do not always behave intelligently. By default, the bots are set to just manage by themselves, but the player has several different options to choose from, such as “attack recklessly” or “play passively”. For example, the healer on my party would oftentimes get too close to the enemy and get killed, but changing the tactic accordingly prevented this for the most part.

Plenty of endgame content. Although I did manage to beat the game’s main story in just over seven hours, I only had to beat half of the game’s quests in order to do so. There are still a couple guild ranks to achieve after the main story, along with several characters to be leveled. Over the course of the game, the player gains access to a total of twelve playable characters, only four of which I used during my playthrough. Getting max level on just those four would be quite the grind, but there are eight others that can also achieve this max level. Depending on the player, this can be a pro or a con, but I am rather neutral when it comes to endgame grinding. 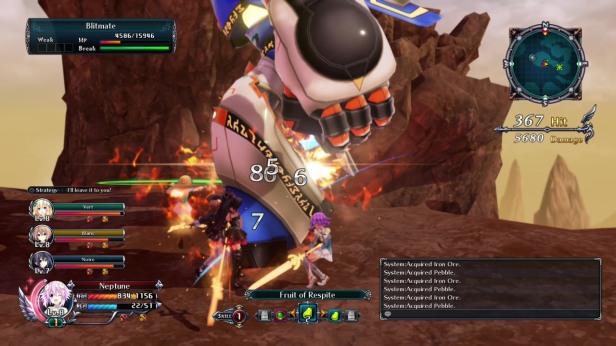 Bland combat. For being a hack and slash title, Cyberdimension Neptunia has some rather bland combat. The game does not even have light and heavy attacks, just a single basic attack that can be spammed endlessly. There is a skill system that allows four skills to be equipped at once, but even that cannot save the combat from mediocrity. I could just have easily beat the game without using skills at all, just using the basic attack and block. Additionally, when hitting an enemy, it felt as if I were hitting a wall. There is little to show that the player is actually hitting an enemy other than the enemy’s HP dropping. There is just no sense of impact.

Enemy deaths. One really annoying aspect of this game is how enemies are still able to finish an attack even when killed mid-animation. An enemy can be killed a full second or two before they unleash an attack and still be able to get that attack off, despite having died during the animation. This could potentially lead to an unfair death, but luckily that never happened to me. Also worth noting is that all enemies have a sort of “death animation” that must be completed before loot is earned and before they can be walked over. This grew a bit annoying as well, as I would oftentimes have to wait for an enemy’s body to fade before I could progress.

Party members and enemies getting stuck. Although it did not happen too often, there were still some instances where members of my party would get stuck in the environment somehow. This prevented them from joining me in combat until I walked far enough away for them to teleport back to me. This usually happened when an enemy was up on an edge, slightly above my party. Jumping and attacking the enemy from beneath that edge would prompt my party to start swinging at the wall below the enemy, rather than running up the slope to get to the enemy. This happened not only with party members, but also with the game’s enemies. It even happened to a boss halfway through my playthrough. 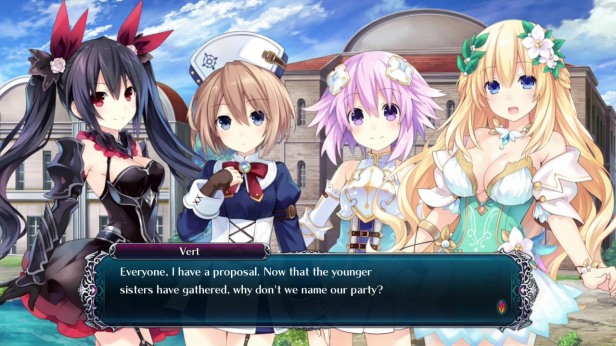 Even though the combat is bland, Cyberdimension Neptunia is a decent game overall. The party system, customization, and endgame content are all great. Even so, there are some minor annoyances, especially when it comes to enemy deaths and characters getting stuck. There are better options for hack and slash titles, but what other hack and slash allows cute girls to wear 10-gallon hats?

You can buy Cyberdimension Neptunia: 4 Goddesses Online on Steam here.