Some time ago, I posted a first impressions of Fading Hearts. I’ve played through the game now and would like to give it a score. Here goes! 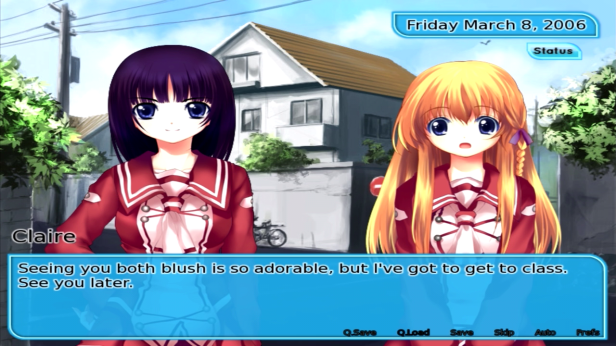 Recently, quite a few VNs have been popping up on Steam. Okay, maybe like three? Well, much more than ever before. Looking forward to more in the future. Other than the fact that the game is a VN (and a dating sim at that), its got a pretty ambitious goal, which, for the most part, turned out well. The game’s genre changes depending on how it’s played, which sounds really cool on paper, and it does work, just not to the extent that I wish it had. Fading Hearts even had some RPG elements mixed in. Yes, including combat (in a VN, whaaa?).

Being a VN, the game has multiple endings depending on the choices made. I stuck with the laid-back, normal life, instead of the adventure life, that’s just who I am (maybe because I love slice of life anime so much?). The storyline itself wasn’t quite that interesting and I felt like it was far too short, much less than I had expected. It is fun, but sometimes the reading was more of a pain. The game is not incredibly fast-paced, but it is short.

Fading Hearts is definitely not for everyone. If you go into the game expecting much in terms of interactivity or gameplay, you’re best off looking elsewhere. Now, for any VN fans, I can’t say this is the best VN I’ve played, but it certainly isn’t the worst. The short length kept me playing until the end, multiple times. It is one of the few VNs on Steam, so it may not be a bad choice after all, although recently released Go! Go! Nippon! ~My First Trip to Japan~ is a far better title.

For $15 you can find a much better game. I’d say this title is worth… $5? That would seem about right, although that is usually cheaper than a lot of VNs these days (looking at you MangaGamer!).