KAMI, recently released on Steam, is probably one of the more unique puzzle games that I’ve played as of late. The game has you folding paper, origami-style, to solve puzzles. The game’s title is the Japanese word for paper and I still have no idea how to pronounce it (I’ve been saying it like ‘CAM-E’). 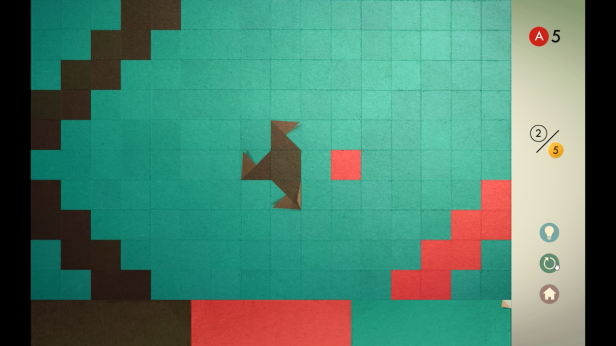 The method used to solve each puzzle is why this game is so unique. Each puzzle starts you off with a square sheet of paper, much like origami, with this piece of paper being covered in small triangles of varying colors. Your objective is to make the entire sheet of paper one solid color in as little clicks as possible.  There’s a color palette at the bottom of each puzzle and its your choice in deciding what color the end result should be, with that hopefully being the color netting you the least amount of clicks.

When you click on any triangle in the puzzle, any other triangle of the same color connected to the clicked triangle will change into the color you have selected. This is a bit difficult to explain, so I encourage you to look at videos, etc. This color-changing mechanic is accomponied by a neat-looking animation as well, which I would describe as a sea of paper-folding triangles.

The game’s major fault lies in the amount of content offered. I wish there were more puzzles to do, as there’s only 63. The game is $4 (on Steam) though, so that may be the reason. I ran out of puzzles rather quickly, although that can probably be attributed to the fact that I went for the bare minimum ranking in each puzzle, “okay”, instead of opting to go for the “perfect” ranking in each. There is another ranking as well, known as “fail”, and I’m sure you can figure what that means on your own.

The game’s difficulty curve is fantastic. Slowly increasing, but not to a completely frustrating point. If you’ve got time to kill, then I highly recommend KAMI. Although it may be short, it’s well-worth the unique experience. Oh, it’s also worth mentioning that the game does not fully display in widescreen, but instead has some rather thin black bars to the left and right. No idea why it wasn’t optimized for widescreen, wish it had been.