I’ll admit it, 140 surprised me. I’ve played quite a few platformers in my time, but this… this was an experience. In a nutshell, 140 is a very minimalistic platformer set to the rhythm of upbeat electronic music. It is quite challenging at times and requires “rhythmic awareness” in order to pass the levels.

Gameplay is where 140 shines. I had a lot of fun with the various platforming mechanics of this game, some of which I’ve never seen before. It’s interesting that your one enemy is this “static” and, upon touching it, your immediately reset to your last checkpoint. There was one segment where the static was forming into blocks that the player had to jump on, but, in coordination with the beat of the song playing, these blocks would shrink back to a smaller block. The catch here was that while the block was shrinking or enlarging, it would be static. This mechanic was used effectively in the third level, the last level. I did notice that the last level seemed to ramp up the difficulty quite a bit, compared to the pace that the first two levels were going at. The last boss “battle” was utterly brutal to complete and required quick acting, or you’d have to restart the fight. This is not necessarily a bad thing, but the difficult should have been panned out better over the three levels of the game, instead of throwing it all into the last level. The game also has another mode, which I was told is “hardcore” mode. I played a bit of this mode, not knowing what to expect. Upon death in hardcore mode, I was kicked to the main menu of the game. In order to beat hardcore mode, you’ll have to go through it all without dying. Yep, that sounds hardcore enough for me, a little too hardcore. I was unable to complete hardcore mode and quit after five or six tries. Overall, the gameplay was challenging, unique, and kept me entertained. 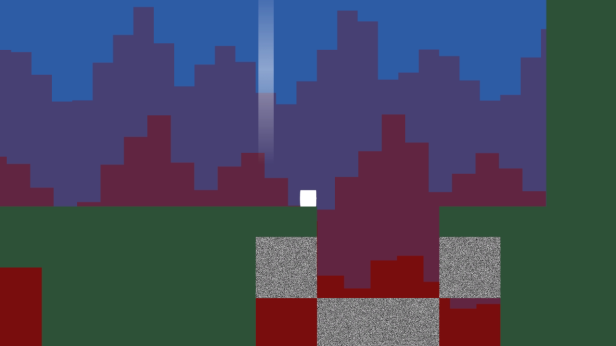 The graphics of 140 might turn a few people away, but I assure you, they fit very well with the gameplay. I’m glad the game was chosen to have this minimalistic style, its been my first exposure to an art style like this. The vibrant colors and the varying shapes of the player sparked my interest in the game to begin with, well, along with the fact that the music was awesome too. When idling, the player remains as a square, when moving, a circle, and, when jumping, a triangle. These shapes fit well with the task that they’re assigned to now that I think about it, square remains flat and is not easily moves, circle can roll, allowing movement, and the triangle allows for easy landing opon a surface. The background seen in the game appears to follow the beat of the music as well, which is quite nice. Overall, minimalistic graphics = win.

The sound and music in the game was very catchy, working very well with the other aspects of the game. The game even won an IGF award for excellence in audio, which was well-deserved. I believe that the title of the game is also derived from the BPM of the music playing, I found quite interesting. I’m probably going to go looking for the soundtrack after I write this, if it exists. Anyways, the audio was excellent! Nothing much to say about the controls here. I used an Xbox 360 controller during my playthrough. The game has only a few actions: move, jump, and exit. In my case, an analog stick, the A button, and the pause button. Very simple, nothing needing changing here, easy to understand controls.